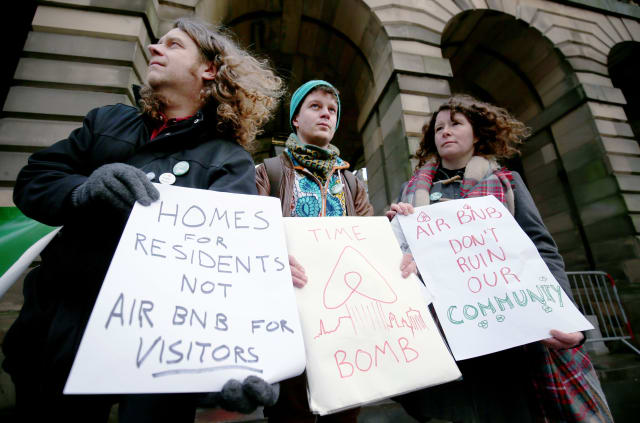 Airbnb-style short-term lets could be subject to new licensing schemes from spring next year, the Scottish Government has announced.

Housing Minister Kevin Stewart also revealed the Scottish Government will “carefully and urgently consider” the way they are taxed.

As well as handing councils the power to bring in licensing schemes, local authorities will in future be able to designate new control areas for short-term lets, with those wanting to let out properties in this way first having to obtain planning permission.

The measures are being introduced following concerns about the impact such lets have on areas such as Edinburgh – one of the most popular places for Airbnb listings.

Just over half (50.5%) of all Airbnb  properties in Scotland are either located in the city or the Highlands.

Announcing the changes, Mr Stewart said: “I believe that these measures allow us to make progress in this Parliament to address a pressing issue for some of our communities but they will not unduly curtail the many benefits of short-term lets to hosts, visitors and the Scottish economy.”

The Scottish Government will monitor the impact of the moves, with Mr Stewart saying he could come back with legislation if problems persist.

He said: “Short-term lets can offer people a flexible travel option and have contributed positively to Scotland’s tourism industry and local economies across the country.

“However, we know that in certain areas, particularly tourist hot spots, high numbers of short-term lets are causing problems and often make it harder for people to find homes to live in.

“That is why we are empowering local authorities to implement a system that works for their area.

“By giving councils the power to set conditions around short-term lets licences and put in place planning control areas to tackle hot spots, communities across Scotland will be able to decide what is best for them and their local economy.”

“That is why the licensing scheme includes a safety element which will be mandatory across Scotland for all short-term lets.”

Edinburgh City Council leader Adam McVey said the changes were “extremely welcome news” and would “give us the controls that we need over short-term lets for our residents and communities across Edinburgh”.

He said: “Today’s announcement by the minister meets our request for mandatory licences and we will now be in a position to more effectively implement planning controls to stop the increase of short-term lets.

“A review of taxation of short-term lets will also make sure that businesses are paying properly for income they’re receiving and local services they’re using.”

He added: “We’ll now work with the Scottish Government on the details of the new system, which I hope will allow us to react quickly when rules are breached as well as addressing the particular challenges we face in Edinburgh, such as housing being taken out of supply, rising rents and antisocial behaviour.”

Andy Wightman, the Green MSP for the Lothians, who has campaigned for better regulation of short-term lets, said he was pleased ministers had acted.

He added: “Those communities who have been adversely impacted by short-term lets will be pleased that the Government has now committed to introducing a much-needed, long overdue licensing scheme by 2021.”

But the Scottish Conservatives were cautious, saying: “Regulation is necessary but there are next to no details on how this might work.

“For example, we don’t even know if councils will be able to refuse licences or on what grounds.

“There is a danger that we could have a triple tax whammy on tourism if the SNP introduces an Airbnb tax on top of a tourist tax and a fee for licences.”

Housing campaigners said the changes were a “welcome first step”.

Graeme Brown, the director of homeless charity Shelter Scotland, said the “unregulated growth” of short-term lets “has led to too many people being locked out of homes that could be let privately to help tackle Scotland’s housing emergency”.

Megan Bishop from Living Rent, Scotland’s tenants’ union, hailed the announcement as a “huge step forward for tenants in Scotland”.