Lawyers of Lisa Smith call for ‘terror’ charge to be dropped

The solicitor of alleged so-called Islamic State-member Lisa Smith has asked for the terrorism charge against her to be dropped.

The Irish woman has been charged with membership of an unlawful organisation, under 2005 terror legislation.

The 37-year-old Co Louth woman, who is a former member of the Irish Defence Forces, appeared at the Criminal Courts of Justice in Dublin on Wednesday.

Defence solicitor Peter Corrigan pleaded with the Director of Public Prosecutions (DPP) to drop the case, saying there was not "a single piece of evidence" amounting to a charge. 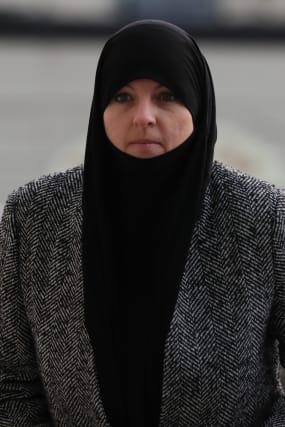 Smith, who wore a hijab with her face visible in court, stood silently throughout the short hearing.

The court heard that the DPP has not yet completed the book of evidence as the case is "complicated and substantial".

A prosecutor said the case involves information from outside the jurisdiction and that they have made a mutual assistance application to another country.

"The investigation is not yet complete – we will receive the file in the coming weeks," the prosecutor added.

She also told Judge John Hughes that she expects there to be further charges.

Judge Hughes said he was consenting to the prosecution's application, saying there is sufficient ground to merit the extension.

Mr Corrigan said he was not objecting to the adjournment.

However, he asked the DPP to consider the evidential threshold in relation to the charge.

He said that there was significant debate within the office of the DPP of whether to being a case.

"The defendant's case does not amount to evidence to give a realistic prospect of conviction," he added.

"I was at police (garda) interviews where all the evidence was presented and it was our opinion that it didn't reach that threshold.

"I would ask that they (DPP) actively review the evidence against the defendant and that the charges are discontinued in the interim."

Mr Corrigan also said there were key issues in relation to how evidence was obtained.

"We say there wasn't a single piece of evidence amounting to a charge that our client is a member of Isis. She went to a caliphate," he added.

The prosecutor said that a file has been assigned and all matters have been expedited.

Judge Hughes said: "You will appreciate that the decision whether to prosecute is a matter for director of the DPP and any subsequent application can be made if it is felt that there is insufficient evidence to prosecute."

Smith, who denies the charge, was remanded on continuing bail.

Smith was arrested at Dublin Airport on suspicion of terrorist offences after returning from Turkey in November with her young daughter.