Johnson digs in on deadline over Brexit trade deal 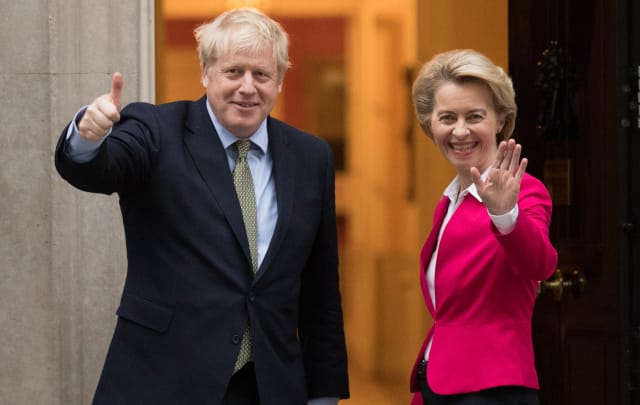 Boris Johnson has told EU chiefs he will not extend the Brexit transition period beyond the end of the year despite Brussels insisting it would be “impossible” to get a comprehensive trade deal by then.

After his first face-to-face meeting with new European Commission president Ursula von der Leyen in Downing Street, the Prime Minister dug in on his deadline.

Ahead of the meeting Mrs von der Leyen had made it clear that if the deadline was not flexible it would become a matter of prioritising certain areas for agreement.

With the UK set to formally quit the EU on January 31, the country would then enter an 11-month transition period which would see it follow EU rules, but not have any say in how the bloc is run.

Following the discussions at Number 10, Downing Street described the talks as “positive”.

A spokesman said: “The PM reiterated that we wanted a broad free trade agreement covering goods and services, and co-operation in other areas.

“The PM was clear that the UK would not extend the implementation period beyond December 31 2020.

“He said the UK wanted a positive new UK and EU partnership, based on friendly co-operation, our shared history, interests and values.”

The comments came after the European Commission president said Britain cannot expect the “highest quality access” to EU markets if it abandons Brussels rules after Brexit.

Mrs von der Leyen said the timeline was “very, very tight” and it would be “impossible” to agree everything by December 31.

The European Commission chief said the PM’s deadline insistence meant there was a limit to what could be agreed before the UK’s final break with the EU.

Mrs von der Leyen said they would need to “prioritise” those areas where there were no international agreements to fall back on to avoid a damaging “hard Brexit”.

Number 10 appeared willing to consider the prospect of sector-specific mini deals, with the Prime Minister’s press secretary telling reporters: “We want to get on in terms of negotiating a deal so maybe the approach of ‘nothing is agreed until everything is agreed’ which characterised previous negotiations, that’s not an approach we are interested in taking.”

Speaking at the London School of Economics, where she studied, Mrs von der Leyen said that would have “consequences” for the sort of agreement which could be reached.

While the EU was ready to sign up to an agreement based on “zero tariffs, zero quotas”, there also had to be “zero dumping” of cheap exports on European markets.

“The European Union is ready to negotiate a truly ambitious and comprehensive new partnership with the United Kingdom. But the truth is that our partnership cannot and will not be the same as before,” she said.

“Without a level playing field on environment, labour, taxation and state aid, you cannot have the highest quality access to the world’s largest single market.”

Mrs von der Leyen said that, throughout the negotiations, the EU would be committed to upholding the integrity of the single market and the customs union.

“There can be no compromise on this. But we are ready to design a new partnership with zero tariffs, zero quotas, zero dumping. A partnership that goes well beyond trade and is unprecedented in scope,” she said.

After the Downing Street meeting, a European Commission spokesman said: “President von der Leyen stressed the fact that the EU fully respects the decision by the UK to leave the EU. This decision brings with it consequences, as no relationship can be as close as being a member of the EU.”