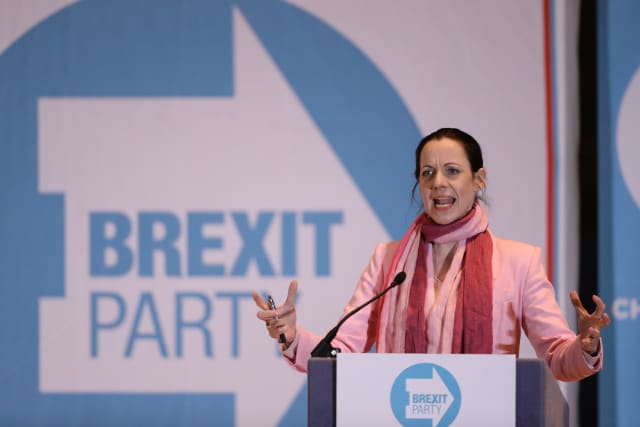 Three MEPs who quit – and one who was sacked by – the Brexit Party have joined the Conservatives.

Annunziata Rees-Mogg – sister of Commons Leader Jacob Rees-Mogg – Lance Forman and Lucy Harris resigned the Brexit Party whip only a week before the election to back the Prime Minister’s push to “get Brexit done”.

They were joined in uniting behind the Conservative Party leader by John Longworth, the former director general of the British Chambers of Commerce who was sacked for “repeatedly undermining” leader Nigel Farage’s election strategy only days before the trio’s walkout.

The four confirmed they have switched allegiance to become Tory MEPs in the European Parliament, in a move that will more than double the number of Conservatives in Brussels.

It takes the number of Tory representatives to seven. Their employment will not last long, however, as all UK MEPs will lose their positions after Britain leaves the European Union on January 31.

The ex-Brexit Party cohort had been sitting as Independents since walking out on Mr Farage’s fledgling outfit on December 5.

Geoffrey Van Orden, leader of the Tory MEPs, said: “We welcome the reinforcement of our Conservative delegation in the final weeks of membership of the EU.

“Additional MEPs coming across to us is evidence that the Prime Minister is delivering on his promise to get Brexit done and to overcome division and uncertainty.”

For Ms Rees-Mogg, it is a return to her former party for which she has already stood as a parliamentary candidate in 2005 and 2010.

Speaking at a press conference after quitting last month, the East Midlands MEP said her decision had not been influenced by an approach from the Tories or her Cabinet minister brother.

“I have had no approaches from the Conservative Party in any description, and I am frankly finding it really quite disturbingly old-fashioned that people are suggesting that my brother gets to tell me what to do with my political views – he doesn’t,” she said at the time.

“We have completely independent views from each other and I am only concerned about Brexit.”

Mr Van Orden said the four were now in the process of being admitted to the European Conservatives and Reformists Group in the European Parliament.