Harry and Meghan’s shock announcement comes after a difficult year 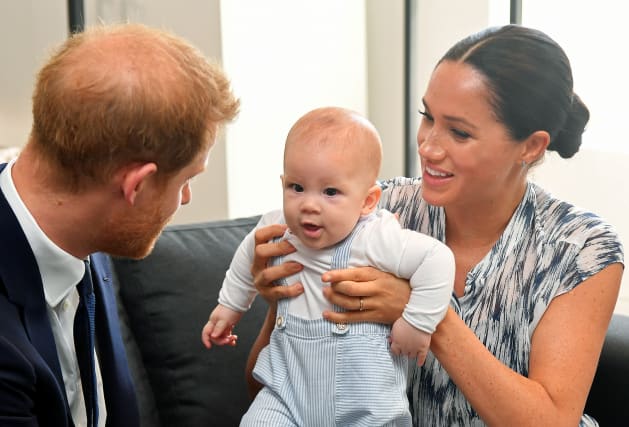 The Duke and Duchess of Sussex’s dramatic decision to quit their roles as senior royals comes after a turbulent year.

There was joy for Harry and Meghan with the arrival of their son Archie Mountbatten-Windsor.

But the lows included rows over privacy, rifts with relatives, the launch of legal action and an attack on the press which overshadowed an official royal tour.

Even the Queen in her Christmas Day address spoke of the “bumpy” path her family and the nation had experienced.

Harry and Meghan’s statement announcing their decision soon after their return from a six-week break in Canada refers to their “many months of reflection and internal discussions”.

They said they will step back as senior royals, work to become financially independent while still supporting the Queen and balance their time between the UK and North America.

Their shock move comes just 19 months after they wed in a televised ceremony in the grand surroundings of St George’s Chapel, Windsor Castle.

Here is what happened in the months leading up to their announcement on Wednesday evening.

– Pregnancy and the royal baby

Meghan kept busy as she geared up for the birth of her first child.

She carried out visits to her new patronages, including Smart Works, which provides high-quality interview clothes and training for unemployed women in need.

Celebrations ahead of the birth included a solo trip to New York City, where the American former actress caught up with friends including stylist Jessica Mulroney, and attended an exclusive baby shower, with the private jet journey and penthouse suite, reportedly funded by friends, said to have cost some £300,000.

In April, Harry and Meghan moved into their new home in Windsor, Frogmore Cottage, after building work was completed ahead of the arrival of their baby.

Archie Harrison Mountbatten-Windsor was born on May 6 weighing 7lb 3oz.

Buckingham Palace announced Meghan was in labour just before 2pm, but in fact the duchess had given birth more than eight hours earlier at 5.26am.

An overjoyed Harry, speaking at Windsor Castle’s Royal Mews, confirmed the news of his son’s birth saying: “I’m very excited to announce that Meghan and myself had a baby boy earlier this morning, a very healthy boy.”

He added: “As every father and parent will ever say, you know, your baby is absolutely amazing, but this little thing is absolutely to die for, so I’m just over the moon.”

Two days later baby Archie was introduced to the world at a photocall in the castle’s St George’s Hall, with Meghan declaring: “It’s magic, it’s pretty amazing. I have the two best guys in the world so I’m really happy.”

Archie was not entitled to be an HRH nor a prince.

Harry and Meghan chose not to use the courtesy title Earl Dumbarton, which Archie was allowed to use, nor to style him Lord Archie Mountbatten-Windsor, making a personal decision he should be a plain Master.

Harry and Meghan kept Archie’s birthplace a secret but inevitably his birth certificate later showed he was born at the private Portland Hospital in London.

Privacy was also a key part of the royal christening, which was held in July in a small chapel inside Windsor Castle.

Royal baptisms are traditionally private but Harry and Meghan went one step further by going against convention and deciding not to announce Archie’s godparents, with the couple facing criticism from some quarters.

Photographs were taken by their personal wedding photographer Chris Allerton, with a couple of images released publicly afterwards.

The duke and duchess faced further problems when it emerged in financial accounts that the refurbishment of their new home, Frogmore Cottage, had cost taxpayers £2.4 million.

Republic, which calls for an elected head of state, questioned why the public’s money had been “thrown” at Harry and Meghan while public services were under financial pressure.

Harry began working with US chat show queen Oprah Winfrey on a mental health documentary series for Apple, while Meghan guest-edited British Vogue, bringing together 15 women for the cover for the September edition entitled Forces for Change.

The duke told chimpanzee expert Dr Jane Goodall he will only have two children, for the sake of the planet, as he interviewed her for Meghan’s version of Vogue.

The duchess launched her Smart Works high street clothing range in aid of charity, stepping out wearing some of the capsule collection, made up of four pieces of clothing, and a bag – which sold out online within hours.

The duke broke down at the WellChild awards, citing how his own journey into fatherhood meant learning about those with serious illnesses “pulls at my heartstrings”.

There were big changes for Harry and Meghan behind the scenes as reports of problems first between Meghan and the Duchess of Cambridge, and then Harry and his brother the Duke of Cambridge refused to subside.

The Sussexes split their household from Kensington Palace, setting up their own at Buckingham Palace with a separate head of communications and their own SussexRoyal Instagram account.

They then left the Cambridges’ Royal Foundation to start a separate Sussex Royal charity.

Sources denied there was a feud, saying it was “largely about preparing both couples for their future roles, which are obviously on divergent tracks”.

But William, Kate, Harry and Meghan’s joint Royal Foundation venture was intended to harness the star power of the four high-profile royals.

Yet it lasted just 16 months after their first appearance as a foursome at the first – and so far only – Royal Foundation forum in London in February 2018.

Harry and Meghan faced a row in the summer over their use of private jets after taking four flights in 11 days, despite championing environmental causes.

Sir Elton John escalated the situation by stepping in to defend them, saying he provided them with a private flight to “maintain a high level of much-needed protection”.

Harry explained his use of private planes, saying he spends “99% of my life” using commercial flights, but occasionally needs to ensure “my family are safe”.

Harry and a heavily pregnant Meghan went on an official overseas tour to Morocco in February.

The duchess celebrated her pregnancy by getting a henna tattoo – a good luck gesture from her Moroccan hosts, and the couple also had an audience with King Mohammed VI.

When Archie was four months old, the Sussexes travelled to South Africa for their first tour as a family, with Harry also heading to Angola, Malawi and Botswana.

In the Nyanga township in Cape Town, the duchess gave a rousing speech to young women who have benefited from an initiative teaching them self-defence and female empowerment.

Speaking publicly about her mixed race heritage, she told them: “I want you to know from me I am here with you as a mother, as a wife, as a woman, as a woman of colour and as your sister.”

Meghan danced with some of the performers as she left the township.

The duke was in all-action mode as he travelled on a South African Maritime Police Unit Rib at Kalk Bay Harbour.

Baby Archie stole the limelight as he received a tender kiss on the forehead from Archbishop Desmond Tutu while in the hands of his mother.

Harry brought back memories of the visit of his mother Diana, Princess of Wales to Angola, as he walked through a minefield in Dirico to see the work of a landmine clearance charity.

In a private visit, Meghan tied a ribbon at the memorial to murdered University of Cape Town student Uyinene Mrwetyana, to pay her respects and show solidarity with those who have taken a stand against gender-based violence.

The couple’s high-profile tour to Southern Africa, carried out at the request of the Government, was overshadowed on the penultimate day.

It was announced Meghan had begun a lawsuit against the Mail on Sunday over an alleged breach of copyright and privacy, after it published a private letter between her and her estranged father.

The newspaper said it would be defending its case vigorously.

Then Harry launched a scathing attack on the British tabloid press, accusing them of a “ruthless campaign” against his wife, adding: “I lost my mother and now I watch my wife falling victim to the same powerful forces.”

Harry later filed his own proceedings at the High Court, against News Group Newspapers, which owns The Sun and the now-defunct News of The World, and Reach plc, which owns the Daily Mirror, in relation to the alleged illegal interception of voicemail messages.

In an ITV documentary filmed on their Africa tour, the couple opened up about their struggles.

US-born former actress Meghan said she had tried to cope with the pressures of her new royal life by putting on a “stiff upper lip” but she was not prepared for the intensity of tabloid interest.

She admitted to feeling vulnerable, saying: “It’s not enough to just survive something, that’s not the point of life. You have got to thrive.”

The duke, questioned about an alleged rift with the Duke of Cambridge, said he loved his brother dearly but they were “on different paths” and have “good days” and “bad days” in their relationship.

He described his mental health and the way he deals with the pressures of his life as a matter of “constant management”.

It was announced the Sussexes and Archie would be spending Christmas with Meghan’s mother Doria Ragland, and not with the Queen at Sandringham, and later Harry and Meghan began a six-week break from royal duties to recharge.

Despite their troubles, Harry and Meghan had no shortage of celebrity fans offering support.

They met Beyonce and Jay-Z at the European premiere of Disney’s The Lion King, with Beyonce telling them: “We love you guys.”

American singer Pharrell Williams, who was also in the line-up, heaped praise on the Sussexes, saying their relationship was “significant” and “beautiful”, with the duchess appearing to add: “They don’t make it easy.”

Former US presidential candidate Hillary Clinton said of Meghan that she wanted to “put my arms around her. Oh my God, I want to hug her”, over the alleged racist and sexist treatment she faced.

American comic Ellen DeGeneres also backed the couple, saying: “I mean I can’t tell you how sweet they are. But the most important thing is I got to hold Archie. I fed Archie. I held Archie.”

She added: “And I just hate it, I see them get attacked and it’s not fair.”