Former chief of the Renault-Nissan-Mitsubishi alliance Carlos Ghosn launched a blistering attack on the Japanese criminal justice system and his former colleagues at Nissan in a live-streamed press conference in Beirut on Wednesday.

In shocking words, likely to provoke disgust in Japan, he compared the plot against him to how the Japanese airforce were taken by surprise by the US attack on Pearl Harbor.

"Did you notice Pearl Harbor?" he said

Ghosn, one of the car industry's most powerful leaders, began by describing his arrest and custody conditions, saying today was "one I have looked forward for every single day for over 400 days, since I was brutally taken from my world as I know it."

"It is impossible to express the depths of my deprivation, and my profound appreciation to be able to be reunited with my friends and loved ones," he said. 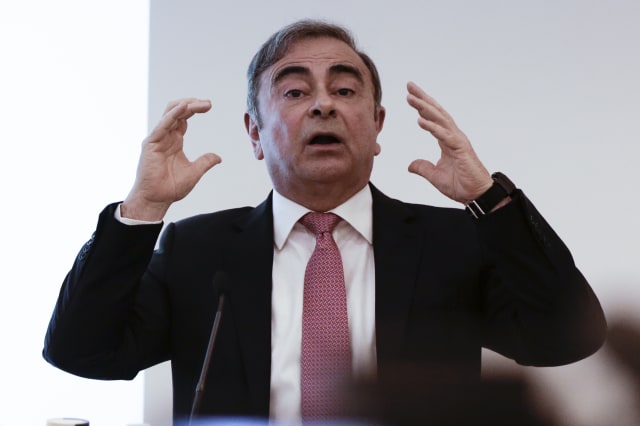 He said that today is a poignant reminder of the day one year ago when he appeared before a Japanese judge in Tokyo to plead his innocence, "bound by a leash around my waist ... after being held alone in solitary confinement."

He went on to say that he was not allowed any contact with his family, apart from seeing their letters through glass, and interrogated for up to eight hours a day without any lawyers present, without knowing what he was accused of.

"'It will get worse for you if you don't just confess' the prosecutor told me repeatedly," Ghosn said adding that he was threatened to confess, and told "if you don't confess we will not just go after you but also after your family."

He said that Japan's courts have a 99.4% conviction rate, and described the country's justice system as one that is "indifferent to the truth, indifferent to fairness and process, indifferent to fundamental civil liberties and justice." He said the choice was to get out of Japan "or die."

Ghosn, who has been charged with four counts of financial and corporate fraud, had been imprisoned in Tokyo for over a year. He jumped bail on 28 December, boarding a private jet in Osaka bound for Istanbul and another from there Beirut, where he has a home. He holds Lebanese, French and Brazilian passports, but Lebanon does not have an extradition treaty with Japan.

Moving on from describing his experience in the prison system, Ghosn then launched into what he claimed were the real reasons behind him being arrested and ousted as chief of the car group—placing the blame firmly at Nissan's door. "The collusion between Nissan and the prosecutor is everywhere," he said.

He said the plot against him was based on Nissan's declining performance in early 2017, and blamed former CEO Hiroto Saikawa for that.

"Some of our Japanese friends thought the only way to get rid of the influence of Renault on Nissan is to get rid of me, he said. "Unfortunately, they were right."

He then went on to compare the "plot" against him to the attack on Pearl Harbor.

Ghosn, using tables and financial statements on a screen, carried on to deny there was anything untoward in the so-called "CEO reserve" fund, which form the basis of the fraud charges against him.

Ghosn said today that he was not going to talk about how he managed to leave Japan, adding, to laughter from the press, "although I can imagine that you are interested."

The emerging story of how automotive titan become, as Bloomberg put it, 'the world's most famous fugitive' is worthy of a film script.

Details of his risky escape plan include: how he walked out of his guarded home in Roppongi Tokyo and boarded a bullet train to Osaka, the involvement of a US security consultant (and former Green Beret), who specialises in hostage extraction, and Ghosn being reportedly loaded onto the private jets in a large case.

Ghosn also spoke today about former Nissan executive Greg Kelly, who is still in custody in Japan, calling him a "victim of the system," and saying he was lured to Tokyo under false pretences to be arrested along with Ghosn.

"He is being punished precisely because he is honourable and refused to participate in this plea-bargaining agreement," Ghosn said.

Ghosn's legal team said earlier on Wednesday that the former executive will request to be tried in Beirut.

Ghosn denied the accusation against him that he illicitly used Nissan funds to buy houses for himself, producing a letter signed by former CEO Hiroto Saikawa approving the payments.

Ghosn's wife said today she had no idea that her husband was fleeing in Lebanon, and he said last week that none of his family was not privy to his escape plan.

Japan has suffered a major loss of face by letting Ghosn get away. Japanese ambassador to Lebanon Takeshi Okubi said Ghosn's escape "can never be overlooked by the government of Japan."

Ghosn denied the accusation against him that he illicitly used Nissan funds to buy houses for himself, producing a letter signed by former CEO Hiroto Saikawa approving the payments.