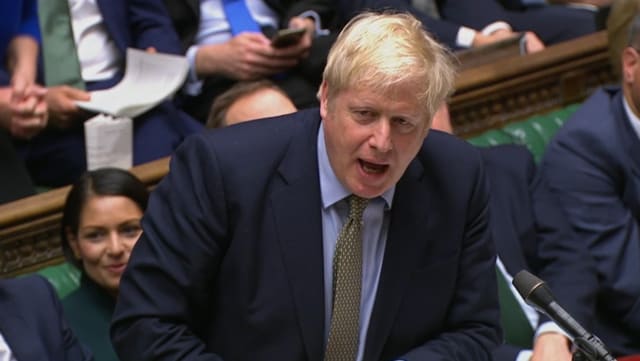 Boris Johnson has condemned Iran’s missile strikes on coalition military bases in Iraq and urged Tehran to hold back from further “reckless and dangerous” attacks.

US President Donald Trump tweeted “all is well” following the attacks which were carried out in retaliation for the killing of Iranian General Qassem Soleimani.

The Prime Minister said there were no British casualties from the missile barrage.

At the first Prime Minister’s Questions session since the election, Mr Johnson said: “We of course condemn the attack on Iraqi military bases hosting coalition forces.

“Iran should not repeat these reckless and dangerous attacks but must instead pursue urgent de-escalation.”

He said Gen Soleimani, who was killed by a US drone strike, “had the blood of British troops on his hands” because he had “supplied improvised explosive devices to terrorists”.

US officials said 15 missiles were fired, with 10 striking the Ain al-Asad base 100 miles west of Baghdad, one striking a base in Irbil in northern Iraq’s semi-autonomous Kurdish region, and another four missing their targets.

Mr Johnson said: “As far as we can tell there were no casualties last night sustained by the US and no British personnel were injured in the attacks.

“We are doing everything we can to protect UK interests in the region, with HMS Defender and HMS Montrose operating in an enhanced state of readiness to protect shipping in the Gulf.”

Foreign Secretary Dominic Raab urged Tehran to step back from the brink of a war which he said would only benefit the Islamic State terror group – also known as Daesh.

Defence Secretary Ben Wallace said: “Further volatility only benefits Daesh and other terrorist groups who will seek to capitalise on instability.”

There have been mixed signals from Tehran on whether further strikes could be expected.

Foreign minister Mohammad Javad Zarif said Iran “took and concluded proportionate measures in self-defence” against the bases which had launched the attack on Gen Soleimani and “we do not seek escalation or war, but will defend ourselves against any aggression”.

But Iranian president Hassan Rouhani tweeted: “Our final answer to his assassination will be to kick all US forces out of the region.”

And Iran’s supreme leader Ayatollah Ali Khamenei made clear that the ballistic missile strikes were a “slap” rather than a full retaliation.

“Last night they received a slap,” he said. “These military actions are not sufficient (for revenge).

“What is important is that the corrupt presence of America in this region comes to an end.”