UK ministers could be given powers in devolved areas, report suggests 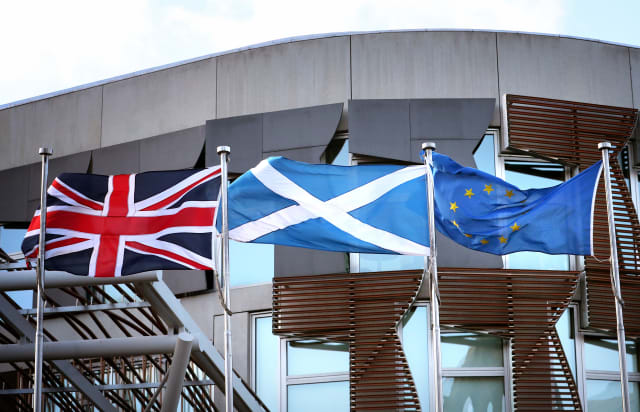 UK ministers could make provision in areas of devolved policy as a result of Boris Johnson’s Brexit deal, according to a new report.

Analysis by the Scottish Parliament Information Centre (SPICe) states new powers in devolved policy areas will be handed to Scottish ministers under the Prime Minister’s Withdrawal Agreement Bill to ensure it is properly implemented.

But the powers will also be conferred on UK ministers, allowing them to act “alone or jointly with Scottish ministers”, according to SPICe.

It means the powers granted to UK ministers in the Bill – which is expected to clear the House of Commons by Thursday – will extend to the whole of the UK and relate to both reserved and devolved matters.

A UK Government memorandum suggests although it could use the powers in areas of devolved competence, it would not normally do so without the consent of those administrations.

“As a result, the powers granted to UK ministers in the Withdrawal Agreement Bill extend to the whole of the UK and relate to both reserved and devolved matters.

It adds: “This approach mirrors the current arrangements outlined in the European Union (Withdrawal) Act 2018.

“On this issue, the UK Government’s Delegated Powers Memorandum states that in respect of most of the powers set out below, whilst the UK Government can use these powers in areas of devolved competence, it will not normally do so without the agreement of the devolved administrations.

“The powers granted to devolved administration ministers in the Withdrawal Agreement Bill relate only to making provisions within their areas of devolved competence.”

SNP MSP Tom Arthur said: “It’s deeply troubling that Westminster has ploughed ahead with an undemocratic power grab – threatening Holyrood’s powers under the guise of Brexit.

“Far from taking powers back to Westminster, the clear view of the Scottish electorate is that more decisions should be made at Holyrood to create a fairer, more prosperous country.

“While the Tories think they can do what they want to Scotland, we must be clear that is not the case.”

Mr Arthur added the candidates in the Scottish Tory leadership election – with Jackson Carlaw and Michelle Ballantyne having declared so far – should tell the Prime Minister to keep his “hands off” devolved powers.

“This will be an early test in the Scottish Tory leadership battle – the candidates should stand up to their Westminster bosses, and tell Boris Johnson to keep his hands off the powers Holyrood has held for two decades,” he said.

“The SNP will seek to amend the Bill to stop this power grab, and all parties at Holyrood must stand firmly against any attempts to erode the hard-won powers of our Scottish Parliament.”