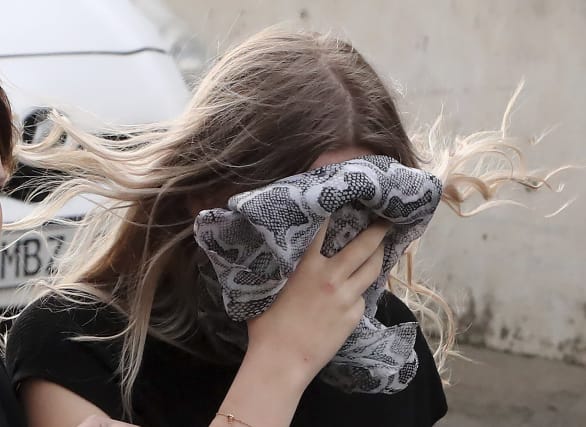 A British teenager found guilty of lying about being gang-raped in Cyprus is on her way home after she was spared jail by a judge who said he was giving her a “second chance”.

The 19-year-old woman hugged her family and legal team and left court weeping, with her head in her hands, after she was sentenced for public mischief.

She was pictured arriving arm-in-arm with her daughter at Larnaca airport on Tuesday afternoon to fly back to the UK.

Lewis Power QC, the teenager’s lawyer, said her legal team would be challenging her conviction and were prepared to take the case to the European Court of Human Rights.

The young woman, from Derbyshire, was stuck on the island for almost five months after claiming she was raped by up to 12 Israeli tourists in a hotel room in the party town of Ayia Napa on July 17.

She was charged and spent about a month in prison before being granted bail in August.

The dozen young men and boys, aged between 15 and 20, arrested over the incident were freed after she signed a retraction statement 10 days later.

But she maintains she had consensual sex with one of the Israelis before he pinned her down and raped her with others – a claim all of them deny.

The woman says she was forced to change her account under pressure from Cypriot police following hours of questioning alone and without legal representation.

Foreign Secretary Dominic Raab said he has raised concerns over her treatment with the Cypriot authorities, after the teenager’s conviction provoked outrage in Cyprus and the UK.

After the sentence, he said: “We will be following up on some of the issues in relation to the case. I spoke to the Cypriot foreign minister about that.

“There is a broader issue for Brits travelling abroad – not just in Cyprus, or indeed in Europe – whether it is holiday, whether it is backpacking, to make sure they can do so as safely and securely as possible.

“What we will want to do is have a conversation with our Cypriot friends and partners about that case once I have downloaded the full facts.”

The teenager’s family had raised fears she would suffer permanent damage to her mental health if she was sent to prison, having been diagnosed with post-traumatic stress disorder.

But Judge Michalis Papathanasiou told the court he would not be jailing her, despite insisting that all the evidence suggested she was guilty.

Sentencing her to four months in prison, suspended for three years, he told the packed courtroom: “I admit, I have been troubled over this.

“All the evidence shows that she had lied and prevented the police from doing other serious jobs.

“Twelve people were arrested and seven of them were there for at least 10 days. That was also a serious offence.

“Her psychological state, her youth, that she has been away from her family, her friends and academic studies this year… this has led me to decide to give her a second chance and suspend the sentence for three years.”

Around 100 protesters gathered outside the court, including a group of about 60 from Israel.

Holding placards reading “we believe you” and “don’t be afraid”, they chanted: “Cyprus justice, shame on you”; “Stop blaming the victim”, and: “You are not alone”.

Their voices could be heard inside court as the judge passed sentence, even after security guards had asked for the windows and blinds to be closed.

Addressing applauding supporters after the hearing, the teenager’s mother said: “I just want to thank each and every one of you for turning up today, having belief, having faith and making sure we get justice.

“On behalf of the family, I would like to say we are very relieved at the sentence that has been passed down today.

“I would also like to say thank you for all the support we have received throughout the globe.”

Adi Izrael, who had travelled to Cyprus from Israel, said: “Many people say, ‘we don’t know she was raped’. But the way they (the Israelis) behaved, something is wrong with this case.

“The rape was obvious and it’s obvious she deserves our support.”

The teenager’s lawyer Mr Power said: “Whilst we welcome the fact that the sentence imposed today allows her to go home, we strongly contest the conviction and the fight for her innocence will go on regardless.

“We will be appealing the conviction and will take this case to the Supreme Court of Cyprus and are prepared to fight this case all the way to the European Court of Human Rights.

“We say and will maintain that this young girl was stripped both of her dignity and her basic human rights.”

Nir Yaslovitzh, a lawyer who represents four of the Israelis arrested over the alleged rape, had previously called for a harsh sentence.

But he said on Tuesday: “What’s important isn’t the decision that the judge gave today.