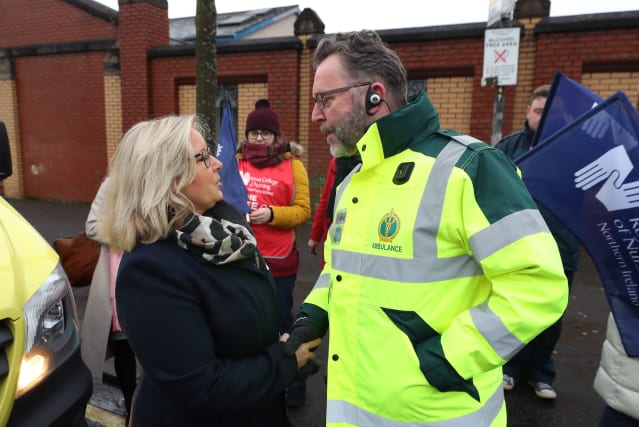 A nurses leader has urged a rapid solution to the “crisis” engulfing the health service in Northern Ireland.

Pat Cullen, director of the Royal College of Nursing union (RCN) in the region, said members have been left with no choice but to take strike action.

She added: “Today, our members in Northern Ireland are making clear to those in power that they and their patients will not be ignored.

“We all wish to see a rapid solution to this crisis.

“However, this will not be secured by trying to blame nurses for the consequences of the decisions made by those in power.”

She said that last week hundreds of people were waiting in emergency departments.

She added: “These are the very reasons why action needs to be taken urgently and why we simply cannot afford to keep waiting.

“In response to this, our emergency departments have been exempted from strike action alongside intensive care units.”

She said people in Northern Ireland were not getting the care and treatment they needed.

A joint letter from chief executives of health and social care trusts said there were very strong grounds for believing that the planned strikes on January 8 and 10 will have much more serious consequences than the last action on December 18.

The letter read: “Our health and care service is already under considerable strain with severe winter pressures over the Christmas and New Year period.

“These pressures continue to build and are particularly intense today.

“With two strike days planned in the space of 72 hours this week, there are serious concerns that the system could be pushed beyond the tipping point.

“This could mean that patient safety will be compromised as never before.”