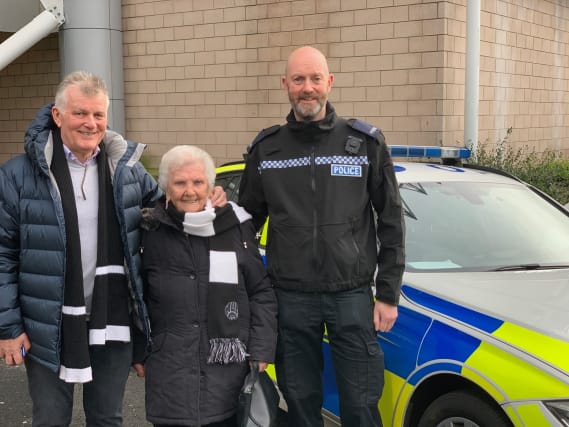 The son of a pensioner whose home was allegedly broken into has thanked the police for taking her to a Newcastle United game.

Florence Rudd, 97, was left low on confidence after the alleged incident at her Lemington home in Newcastle, prompting Pc Les Mitchell to organise the trip to St James’ Park.

“After my meeting with Florence, I was really sad to hear her say that she didn’t want to leave the house anymore,” Pc Mitchell said.

“We talked about Newcastle and she told me that despite being a supporter for more than 90 years she had never been to see a game and I just thought ‘what a great opportunity – how lovely would it be if we could encourage her to leave the house to see something she loves’.”

Ms Rudd was taken to see Newcastle host Everton in the Premier League on December 28, with the family driven to the ground in a police car before enjoying food inside the Heroes Suite.

The Magpies lost 2-1 to the Toffees, but Ms Rudd’s son Colin was full of praise for Northumbria Police.

In a letter to Northumbria Police’s chief constable Winton Keenen, he wrote: “Given our learned expectation that the police are severely understaffed and overstretched we did not expect such a dynamic and professional response.

“All your officers we dealt with are a credit to you and Northumbria Police and have made what was an unpleasant experience a little easier to bear.”

Two men were arrested shortly after officers received a report of the suspected break in at Ms Rudd’s home on December 2.

Both appeared at Newcastle Crown Court on January 2 where they pleaded not guilty to burglary and are due to appear on trial at the same court on May 11.