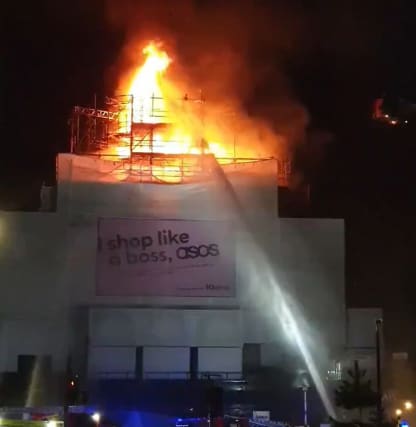 The owner of the Koko music venue said he is “deeply saddened” after the historic building was damaged by fire.

Olly Bengough thanked the London Fire Brigade for their “quick” response and said there were no casualties in the blaze.

Eight fire engines and around 60 firefighters tackled the flames at the nightclub in Camden High Street, north London, after being called shortly before 9pm on Monday.

London Fire Brigade said 30% of the building’s roof had been alight and warned people to stay away from the area.

In a statement, Mr Bengough said: “We are deeply saddened by the fire that took place at Koko last night and pleased to announce there have been no casualties.

“We want to thank the London Fire Brigade for its quick response and how well it handled the situation.

“The amount of support we have received from the public has been amazing and we’ll be doing our best to get the redevelopment of this iconic building back on-track.”

He did not comment on whether the fire would delay the venue’s planned reopening in the spring following a refurbishment, saying the club would provide an update as “circumstances become clearer”.

The blaze was brought under control in the early hours of Tuesday but the cause is not yet known.

Koko, formerly known as Camden Palace and the Camden Hippodrome,  closed in March last year for refurbishment and was covered in scaffolding at the time of the fire.

It was set to reopen within months after a “major state-of-the-art” revamp, including a renovation of the rooftop area, following the purchase of two adjacent buildings.

Firefighters will remain at the scene throughout the day as the investigation continued.