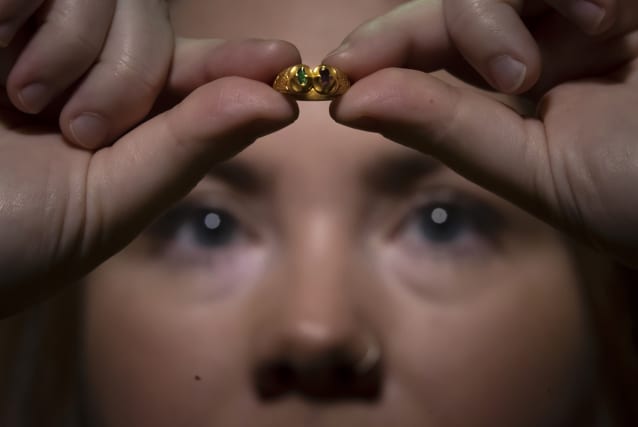 A medieval gold ring which has gone on display after being found by a metal detectorist is likely to have been a 15th-century love token, an expert has said.

The artefact, which is currently being shown at the Yorkshire Museum in York, is believed to have been owned by a “potentially prominent member of society”.

It was found by detectorist Paul Ibbotson, lying beneath the surface of soil in a field at Fulford, near York, in December 2016, and was later legally declared as treasure.

The ring – a gold band engraved with flowers and set with ruby and emerald gemstones – was purchased by the York Museums Trust in 2019.

Adam Parker, the assistant curator of archaeology for the trust, said the combination of the gemstones is “unusual”.

He told the PA news agency: “It’s a rare item. Rings with rubies, sapphires or glass have been found before, but this dual bezel with both ruby and emerald is more unique.

“In medieval times it would have been seen as an exotic item – one likely to originate in the Middle East or potentially North Africa.”

Mr Parker added that historic gemstone books discuss the “magical and medicinal associations” of the two stones – with emeralds said to be linked to chastity, and rubies with love.

“The conceptual idea of these two stones being brought together on a ring makes it ideal as a love token, or a betrothal charm which was probably given from a man to a woman,” he told PA.

“In itself it is aesthetically beautiful, and it provides an insight into our understanding of relationships in medieval times.”

Mr Parker said it was almost impossible to speculate with any certainty about who owned the ring, due to the lack of “strong archaeological context”.

But he added: “This is something that is likely to have only been available to a very small section of society – possibly landed gentry, or those who associated in royal circles.”

Mr Parker told PA there is “no doubt” that it had been buried under the ground for 500 years before being discovered, and that it may have found its way there while the owner was travelling into or out of York.

The ring was bought by the York Museums Trust in 2019 for around £20,000, thanks to funding from the Headley Museums Archaeological Acquisition Fund, the Arts Council England/V&A Purchase Grant Fund, and public donations.

It was put on display as a permanent feature of the Yorkshire Museum’s Medieval York: Capital Of The North exhibition in September.