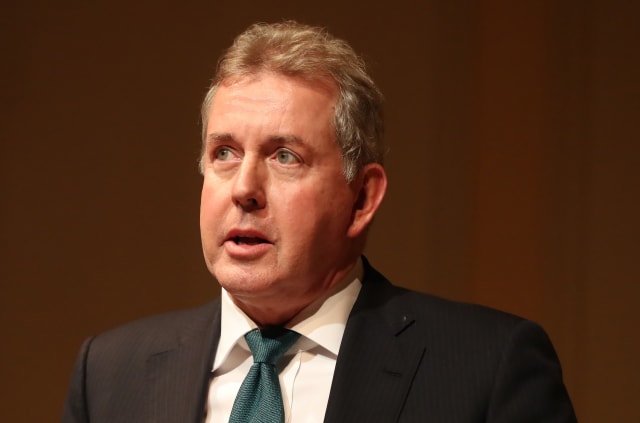 The Government is seeking a new British ambassador to the United States following the resignation of Sir Kim Darroch last year.

Downing Street announced that a job advert had been placed on the civil service’s internal jobs portal on Tuesday – meaning only existing civil servants can apply.

There had been speculation that Boris Johnson could make a political appointment – with names such as Brexit Party leader Nigel Farage being floated for the post.

Sir Kim resigned in July saying his position had become “impossible” following the leak of diplomatic cables in which he described Donald Trump’s White House as “inept” and “dysfunctional”.

The post has been vacant since his departure, but has been bolstered with additional staff.

The Prime Minister’s official spokesman told a Westminster briefing: “The Foreign Office has this afternoon begun the process of recruiting the UK’s ambassador to the United States and has published the job advertisement today on the civil service’s own jobs portal.

“Ministers believe that the right candidate will be a successful leader with proven experience of working with government on the broad range of issues that our bilateral relationship with the US covers and therefore can be found from within the civil service.”

The spokesman was unable to say when the Government aimed to have the new ambassador in place.

Number 10 also said that Madeleine Alessandri had been made the new permanent secretary of the Northern Ireland Office, following Sir Jonathan Stephens’ announcement last year that he would be retiring from the civil service.

She said: “This is a critical time to be joining the Northern Ireland Office as the hard work continues to restore devolved government at Stormont.

“I am very much looking forward to joining the Secretary of State and the great team at the NIO, and working with a restored Executive to create a stable, prosperous and safe Northern Ireland that works for everyone.”

Ms Alessandri is currently the UK’s deputy national security adviser and the Prime Minister’s adviser on national resilience and security.