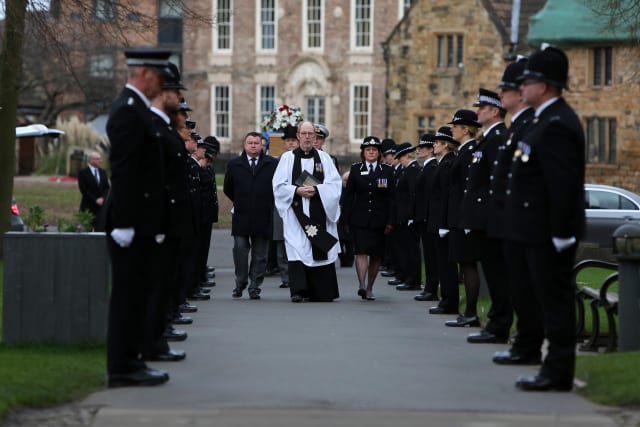 Tributes have been paid at his funeral to a former senior officer who became a police and crime commissioner for a force which was repeatedly ranked outstanding.

He was twice elected to be Durham’s police and crime commissioner, before he had to step down when he was diagnosed with the debilitating condition.

He was named as a CBE in the New Year honours list, days after his death, and had been given special dispensation to receive the insignia early in the hospice where he died.

The father of two was born in Stirlingshire and raised in Corby, Northamptonshire, and after training to be a teacher, switched roles to become a police officer.

He rose through the ranks, becoming assistant chief constable of Durham Police and deputy chief of Cleveland.

He was the ACPO lead on football and attended the 2002 World Cup in Japan representing the British police.

In 2012, having retired as a police officer, he stood as PCC in Durham and, with chief constable Mike Barton, the force was rated outstanding four times in succession.

In this role, Mr Hogg advocated a change in national drug policy, with an emphasis on better rehabilitation for users and tackling re-offending.

And in his final months, he called for the law on assisted dying to change.

Mr Barton’s voice cracked with emotion as he paid tribute during the service, saying: “We are the poorer for losing you Ron, but the richer for having been one of your friends.

“The world will miss your compassion, vision and passion.

“But we will not miss your inspiration, because it will live on.”

The funeral cortege was led by four police horse-riders, and a piper played as the coffin was carried in to the 900-year-old cathedral.

After the service, the cortege drove around the Palace Green and well-wishers applauded as the hearse was driven past the cathedral.