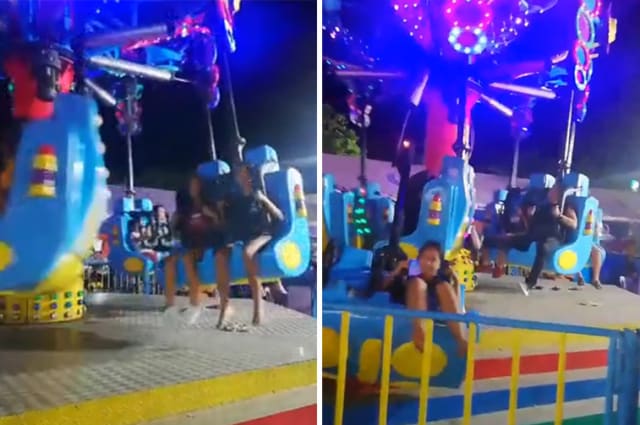 This is the terrifying moment two revellers were injured after being flung from a fairground ride when the mechanical arm snapped.

The pair were among hundreds of locals celebrating at the carnival in Antipolo City, the Philippines, on December 29.

They were riding on the 'Spiral Jet' ride - a type of mechanical swing carousel - when the arm holding their gondola suddenly snapped off.

Footage shows how the boy and girl were thrown to the ground while still locked into the chair.

A large piece of equipment then drops inches from them.

A shocked bystander, who asked to remain anonymous, said he was waiting in line for his turn on the ride when the accident happened.

He said: ''There was no indication of a problem with the ride. The carriage just suddenly snapped. The two people were hurt and the ride was closed."

"The ride was working fine before them, but the pole connecting the carriage with the ride seemed to have leaks. There seemed to be gas coming out of it."

The two injured victims were conscious but rushed to the hospital immediately to receive treatment.

The operators said they are ready to help the victims with the hospital and medical expenses.

Carnival management told local media that those affected by the accident could contact their office for assistance.

Investigations into why the seat dislodged are ongoing.