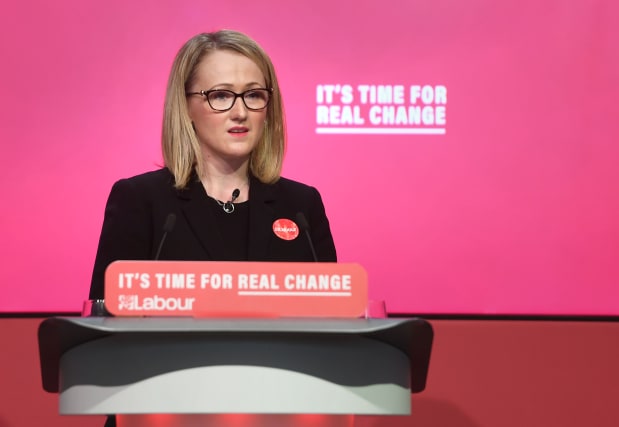 Labour frontbencher Rebecca Long-Bailey has been backed for the party leadership by her ally Angela Rayner – but also faced claims that she would continue with an agenda already rejected by voters.

Ms Long-Bailey is yet to formally declare that she is running for the leadership but picked up the support of her friend and flatmate Ms Rayner, who has launched her own bid for the deputy role.

Labour’s ruling National Executive Committee was meeting on Monday to decide on the campaign timetable and other key elements for the election of Mr Corbyn’s successor in the wake of the mauling suffered by the party in December’s general election.

Mr Watson, who frequently found himself at odds with Mr Corbyn and his allies, warned Labour members against the prospect of choosing another leader from the party’s Corbynite left.

“The one that I worry about – but I don’t know what she stands for – I mean, when I look at Rebecca Long-Bailey, she’s really the continuity candidate,” he told Sky News.

“She sort of stands for Corbynism in its purest sense and that’s perfectly legitimate but we have lost two elections with that play.

“But she hasn’t said anything yet; as far as I know she has not formally announced and it might be that she chimes a different note in her opening bid and that she wants to take the party in a different direction and she’s very candid about what went wrong.”

She said whoever won the leadership faced a stark challenge and the party risked becoming irrelevant unless it could “rethink and renew our purpose and how we convince the people to share it”.

The meeting of the NEC was considering factors that could potentially affect the outcome of the leadership election, such as the “freeze date” for eligibility to vote for those signing up and the cost of becoming a registered supporter – non-party members who can vote in the race.

Party chairman Ian Lavery said he expected the NEC to come up with the “right solution” during its discussion on the leadership contest.

The possible leadership contender said “we’ll see what happens” when asked whether he would stand to succeed Mr Corbyn.

Shadow Cabinet Office minister Jon Trickett told journalists outside the NEC meeting that he did not expect the leadership rules to be changed.

Chief opposition whip Nick Brown, who attends the NEC but does not vote, dismissed suggestions that the process could be a “stitch-up” in favour of a left-wing candidate.

MPs hoping to take the helm of the party spent the weekend setting out their stalls.

Prominent backbencher Jess Phillips told the BBC’s Andrew Marr Show that she would “wait and see” how Brexit turns out, but hinted that a return to the EU would be possible under her leadership.

However she appeared to row back on that suggestion in an article in the Independent, saying: “People are asking me if I’ll lead the campaign to rejoin the EU. We haven’t even left yet!

“The honest answer is that I don’t know what the future will hold, but we must accept the result, move our country forward and hold Boris Johnson to account.

“I can’t see a campaign to rejoin winning support in the next Labour manifesto.”