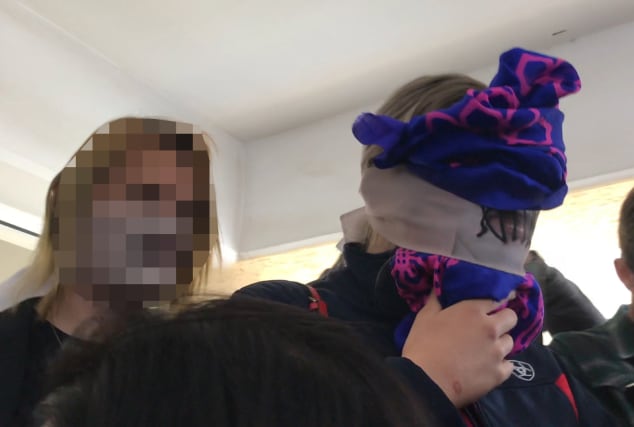 Dozens of protesters chanted “boycott Cyprus” outside the Cypriot High Commission in London as part of a march in support of a British teenager convicted of lying about being gang-raped.

Demonstrators gathered in front the High Commission Of The Republic Of Cyprus in St James’s Square on Monday before setting off to march through the streets past Downing Street and the Foreign Office to Parliament Square.

The protesters were calling for justice for the 19-year-old woman, who was found guilty of public mischief and is due to be sentenced on Tuesday.

Placards saying “I believe her” and “the rapist is you” were held aloft, while people chanted “we believe her, we want justice” and “boycott Cyprus”.

Verity Nevitt, co-founder of the Gemini Project – which organised the march, told the PA news agency that it was to “stand in solidarity” with the teenager “against the injustice she is facing.“

She added that: “The aim of today is to put pressure on the Government and [Foreign Secretary] Dominic Raab to intervene and do something.

“They’ve said a few words about being concerned but they haven’t taken any action. They should be out there they should be doing something.”

Speaking to the protesters, her twin sister Lucy Nevitt branded the woman’s treatment a “gross miscarriage of justice”.

She called on Prime Minister Boris Johnson and his Government to take action, and added: “Why are you silent, why have you chosen the side of the oppressor.

“Why are you allowing this gross miscarriage of justice to be inflicted upon a British citizen, be that one that is vulnerable and one that has already experienced unimaginable trauma.”

But she was charged and the dozen young men, aged between 15 and 20, who were arrested over the incident were freed after she signed a retraction statement 10 days later.

She maintains she was raped but forced to change her account under pressure from Cypriot police.

The teenager could face up to a year in jail and a 1,700 euro (£1,500) fine upon sentence after being found guilty of public mischief at Famagusta District Court, in Paralimni.

Foreign Secretary Dominic Raab has conveyed concerns to his Cypriot counterpart over the treatment of the 19-year-old woman.

But Mr Raab, appearing on Sky’s Ridge On Sunday, warned that the case now needs to be handled “very sensitively” to prevent doing anything “counter-productive” between now and the teenager’s sentencing.