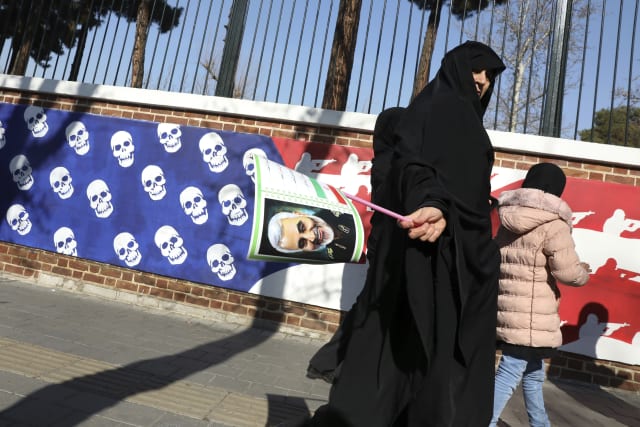 The threats of retaliation coming out of the US and Iran over the last 24 hours were enough to spook markets into taking a knock by closing time on Monday.

There were some winners – shares in oil and defence companies enjoyed a healthy boost on the uncertainty – but most traders watched nervously to see what steps Washington and Tehran take next.

Its push into the red was also helped along by the strengthening pound, which received a boost after the latest IHS Markit/CIPS survey found the UK services sector was no longer in decline last month.

When the pound rises, the stock market tends to fall as shares become “more expensive” to foreign investors who trade in dollars and euros.

Oil also enjoyed a boost in value, with a barrel of Brent Crude at 68.94 dollars a barrel – up from 68.11 dollars at the end of Friday’s session. It had hit more than 70 dollars during the day, an eight-month high, but it fell back by the afternoon.

David Madden, market analyst at CMC Markets UK, said: “Stocks have sold off again on account of the US-Iran tensions.

“The rhetoric from both sides has been upped, which has prompted traders to dump equities. The Iranian regime has suggested it will carry out an attack on US interests as a payback for the killing of one of its military commanders in Iraq last week.

“President Trump has warned Iran that any military response will bring about further US attacks. The tense standoff has encouraged traders to curtail their exposure to most stocks.”

In company news, the first handful of Christmas results from the high street started dropping, building into an avalanche later in the week, with Tesco, Sainsbury’s, Marks & Spencer, Morrisons, Dunelm, JD Sports and others, reporting over the next few days.

But Monday was the turn of train-maker Hornby, which posted higher sales and profit margins over the period.

Even the news that bosses have expanded its existing loan from the company’s largest shareholder to its maximum level, failed to spook investors. Shares closed up 1p at 39p.

Elsewhere, online trading platform Plus500 said it expects profits to slump more than 60% due to a regulatory clampdown on companies selling high-risk, complicated services to amateur investors.

But investors were reassured that the second half of the year is improving, with shares closing up 6.6p at 859.8p.

NMC Health confirmed an independent review into the company’s own health will start by looking at how much cash it has. The announcement spooked investors, who sent shares closing down 78.5p at 1,671.5p.