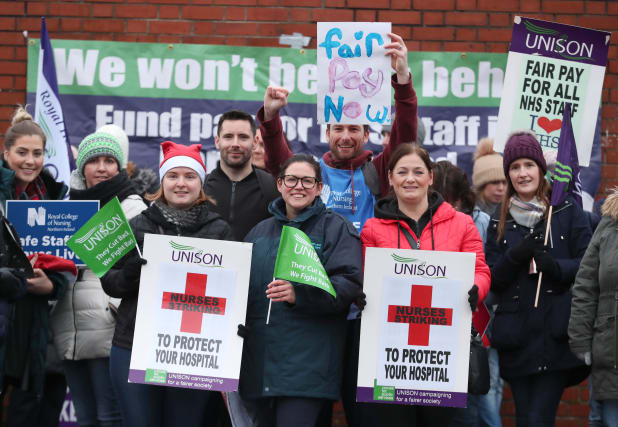 Midwives in Northern Ireland are set to vote on taking part in industrial action.

The ballot, which opened on Monday, comes after health workers in the region have taken part in a series of actions over pay and staffing levels.

Further strikes by health workers across Northern Ireland will take place later this week amid an ongoing dispute with the Department of Health.

Nurses from the Royal College of Nursing (RCN) will stage their second day of strike action on Wednesday while members of the biggest healthcare union Unison will take part in walkouts on Friday.

Negotiations between the unions and the department broke down in December without agreement when a fresh 3.1% pay offer was rejected by unions.

Northern Ireland Secretary Julian Smith has said finding a solution will be among his top priorities during ongoing political talks aimed at restoring devolved government.

The Royal College of Midwives (RCM) ballot asks midwives and maternity support workers (MSW) whether they wish to take industrial action up to and including strike action.

It comes after what the union described as “exhaustive talks” over pay and conditions with the Department of Health.

Karen Murray, the RCM’s director for Northern Ireland, said they have “exhausted every avenue” trying to resolve the dispute with the department.

She said the decision to ballot members was taken after a “great deal of thought and consideration”.

“Despite our best efforts to negotiate a fair pay deal for our members, the department have failed to come to an agreement,” she said.

“Our midwives here are much worse off in their pay packet than their colleagues in other parts of the UK.

“This is simply neither right nor fair. That is why we are recommending our members to vote yes to industrial action.”

The RCM has claimed that midwives in Northern Ireland currently earn up to £2,000 less than their colleagues in England.

“It is time to take a stand for fair pay.”

Responding to earlier industrial action by other health workers, the department said it did not have the budget or the authority to meet union demands on pay.

The RCM ballot will close on January 29.