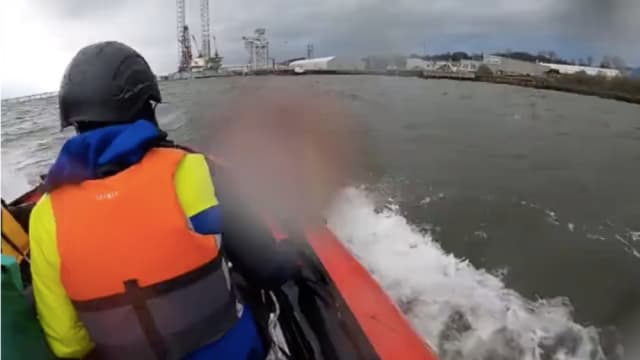 Climate activists have boarded a gas rig in Dundee in a bid to prevent it heading out to the North Sea.

Extinction Rebellion Scotland said three of its members have climbed aboard the Valaris 122 rig.

They are climbing the towers on the structure and intend to remain there to prevent it leaving.

Five activists set out in a boat at around 11.30am and three made it on board.

An Extinction Rebellion Scotland spokeswoman said they have taken all necessary safety precautions and have informed police of the “peaceful occupation”.

She said the protesters are equipped with supplies and plan to hang Extinction Rebellion flags from the rig.

The activists have issued three demands for the Scottish and UK Governments, including urging them to “tell the truth” about the impact of the fossil fuel industry on the climate crisis.

They also want politicians to act now to decommission oil and gas infrastructure, with a just transition for workers and communities, and a legally binding citizens’ assembly.

One of those who boarded the rig, Jo, 34, a gardener from Edinburgh, said: “I am doing this for my niece Ivy, who is an incredible little human.

“I don’t want to say to her that I didn’t take a stand when I had the choice and left it to other people to sort it out.

“I am going to give it my best shot and go down fighting because I can see the world through her eyes and I want to protect things for her.”

Fellow protester Fiona, 23, from Inverness, said: “The 5.7 billion barrels currently available in our operating oil and gas fields give us zero chance of staying below ‘safe’ 2C warming.

“We are currently living in a world warmed by 1.1 C – and we are seeing the catastrophic, heartbreaking and devastating effects everyday.”

Alison, 28, from Dundee, who also boarded the rig, criticised government subsidies of the oil and gas industry.

A spokesman for Forth Ports, owner of the Port of Dundee, said: “Earlier today, Forth Ports was made aware that a number of apparent protesters had made their way via the River Tay to the Valaris 122 jack-up rig, which is currently berthed at Princess Alexandra Wharf at the Port of Dundee.

“We have deployed one of our pilot boats at the scene and this will remain in attendance as a safety precaution should anyone require assistance.

“We are also liaising with the rig’s owners and with the relevant authorities.”