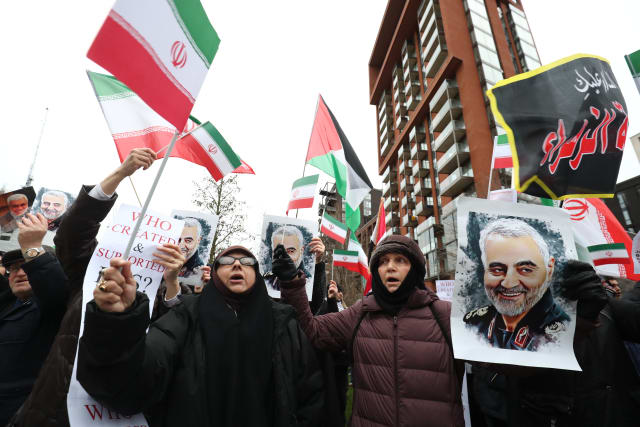 Downing Street has sought to distance itself from Donald Trump’s threat that Iranian cultural sites could be targeted amid heightening tensions in the Persian Gulf.

The US president has refused to back down after raising the prospect of targeting such sites over the weekend, following his decision to assassinate the Iranian military chief Qassem Soleimani.

“There are international conventions in place that prevent the destruction of cultural heritage,” the Prime Minister’s official spokesman told a Westminster briefing.

It came after Mr Johnson, Emmanuel Macron and Angela Merkel issued a joint statement calling on all sides to work towards an urgent easing of tensions in the region.

The European leaders said that while they were concerned by the “negative” role Iran has played in the region – including through forces directed by Gen Soleimani – there was now “an urgent need for de-escalation”.

Downing Street insisted Britain’s security partnership with the US remained “very close” despite Mr Trump not informing the UK of its plans to assassinate the general – adding that the UK is in “regular dialogue at every level”.

Mr Johnson spoke to the Iraqi prime minister Adel Abdul-Mahdi on Monday morning, and there will be a meeting of the National Security Council on Tuesday.

A Number 10 spokeswoman said the two leaders “discussed the need to deescalate tensions in the region following the death of Qasem Soleimani and agreed to work together to find a diplomatic way forward”.

“The Prime Minister underlined the UK’s unwavering commitment to Iraq’s stability and sovereignty and emphasised the importance of the continued fight against the shared threat from Daesh,” they added.

Ministers are urging the Iraqi government to allow foreign troops to remain in the country to fight against the threat posed by so-called Islamic State, despite its parliament calling for their expulsion.

And the British Government is “urgently speaking to partners about next steps” after Iran’s “extremely concerning” announcement that it will abandon the limits in the unravelling nuclear deal on fuel enrichment, its uranium stockpile and research activities.

Around 400 UK troops are stationed in Iraq in the fight against IS, while the US has 5,200, prompting fears of a withdrawal that could cripple the battle against the terror group.

Middle East Minister Andrew Murrison called on players involved to “cool it”, telling Sky News: “I think the Americans are trying to make sure this doesn’t escalate in the sense of Iran taking measures which are disproportionate and which may cause, inevitably, this thing to go on and on and get worse.

“The problem with this is there is a risk of miscalculation and reaching a point which is very difficult to reverse.

“So I would urge all concerned to cool it and that has been the consistent refrain of the UK Government trying to dial down the temperature on this and urge de-escalation.”

Elsewhere, The Times quoted an unnamed senior commander in the elite Quds Force, which Gen Soleimani commanded, as warning British soldiers could be fatally attacked as collateral.

“Our forces will retaliate and target US troops in (the) Middle East without any concern about killing its allies, including UK troops, as this has turned in to a fully-fledged war with much collateral damage expected,” the commander said.

He tweeted: “As the Ambassador and high representative of my country in the UK, I strongly condemn the vicious lie and provocative news by #Times today.

“I will ask the concerned UK authorities to take swift action to stop such malicious false propaganda in this very sensitive time.”