Boris Johnson renews push to get his Brexit deal through Parliament 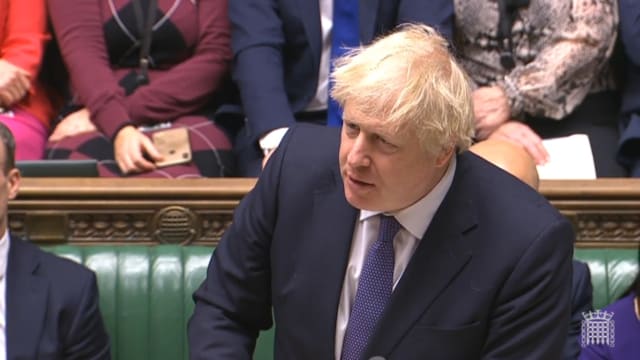 Boris Johnson’s Brexit deal returns to the Commons on Tuesday as the Government resumes its push to drive through Britain’s departure from the EU by the end of the month.

MPs, returning to Westminster following their Christmas break, begin three days of detailed debate on the Withdrawal Agreement Bill (WAB) with the House expected to sit late into the night.

Opposition parties have tabled a number of amendments to the legislation, but with the Government now enjoying a Commons majority of 80 they look unlikely to succeed.

The Prime Minister is determined to deliver on his general election manifesto promise to “get Brexit done” by January 31.

The WAB has already cleared its first Commons hurdle, passing its second reading vote before Christmas with a majority of 124.

The Government now wants it to complete its remaining stages in the lower House by the end of business on Thursday.

It would then go to the Lords next week, with ministers confident it can conclude its passage through Parliament in time for it to be ratified by the European Parliament by the end of the month.

That would mean the UK leaving the EU on January 31, with a deal in place covering citizens’ rights, the Irish border and Britain’s “divorce bill” of about £30 billion.

It will also mark the start of an 11-month transition period, during which the UK will continue to follow EU rules, while negotiations take place on a free trade agreement.

Senior EU figures, including chief negotiator Michel Barnier, have warned that completing a deal in such a tight time-frame is likely to prove impossible.

However Mr Johnson has been adamant he will not seek any extension to the transition period, raising fears among opposition parties that Britain could be heading for a no-deal Brexit at the end of the year.

Labour has tabled an amendment to the WAB requiring ministers to seek a two year extension to the transition period, to the end of 2023, if there is no agreement by mid June.

But given the Government’s rock-solid majority, the attempt would appear to be doomed to defeat.

Other amendments tabled by Labour include a bid to protect the right of unaccompanied child refugees to be reunited with their families after Brexit.

It follows the decision by ministers to remove the so-called “Dubs amendment”, intended to ensure child refugees could still rejoin their families in the UK after free movement ends, in the wake of the Conservatives’ election victory.

The SNP meanwhile has tabled a series of amendments intended to strengthen the rights of EU nationals living in the UK.

Immigration spokesman Stuart McDonald said: “It is vital that opposition parties back the SNP in protecting the rights of our fellow EU nationals who have made Scotland and the UK their home and who now face being plunged into further instability.

“We cannot allow this reckless, right-wing Tory government to push ahead with its Brexit plan which risks inflicting hostile environment 2.0 – this time on EU nationals who live and work in the UK, including in our vital NHS.”

The Liberal Democrats have said they will press for an amendment requiring the Government to hold a public inquiry into the conduct of the 2016 EU referendum.