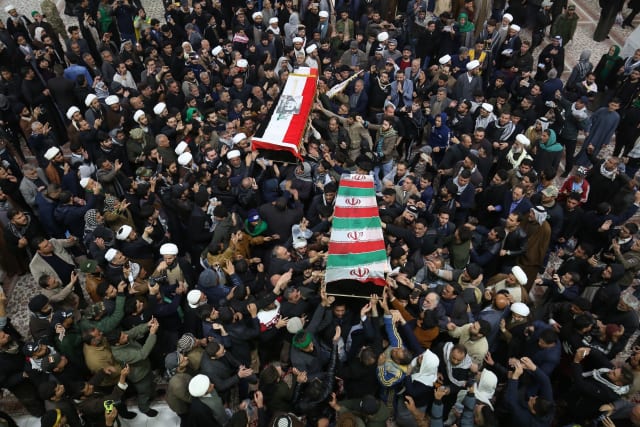 The Government has urged Iraq to allow UK soldiers to continue the fight there against the so-called Islamic State terror group, after its parliament called for the expulsion of foreign troops.

The bill passed on Sunday, in the latest reprisal following the US killing of Iran’s top military general Qassem Soleimani in Baghdad, was not legally binding.

Some 400 UK troops are stationed in Iraq in the fight against IS, while the US has 5,200, prompting fears of a withdrawal that could cripple the battle against the terror group.

The Ministry of Defence was understood to be awaiting the decision of the Iraqi government before acting over the soldiers, based there as part of the US-led coalition.

A UK Government spokesman said: “The coalition is in Iraq to help protect Iraqis and others from the threat from Daesh (Islamic State), at the request of the Iraqi government.

“We urge the Iraqi government to ensure the coalition is able to continue our vital work countering this shared threat.”

In response to the killing of Gen Soleimani on Friday, Iraqi prime minister Adel Abdul-Mahdi said the parliament could end the presence of foreign troops or restrict their mission training local forces.

He backed the first option.

Foreign Secretary Dominic Raab had spoken to him on Sunday morning in the wake of the killing of the head of the elite Quds Force, who masterminded Tehran’s security strategy in the region.

Mr Raab was defending the US over Donald Trump’s decision to launch the drone strike, which has raised fears of all-out war.

He accused hardliners in Tehran of “nefarious behaviour”, described General Soleimani as a “regional menace” and said the United States has the “right of self defence”.

But his call for the pursuit of a diplomatic route to bring Tehran “in from the international cold” came as Iran accused the US president of breaching international law.

“The US will take their own operational judgment call but they’ve got the right of self defence,” Mr Raab told Sky’s Sophy Ridge on Sunday.

“So we understand the position the US were in and I don’t think we should be naive about the Iranian Revolutionary Guard or indeed General Soleimani.”

The Foreign Secretary also defended Boris Johnson, saying he has been in “constant contact” with the Prime Minister who remained “in charge” throughout his Caribbean holiday during the crisis.

But, as Mr Raab was speaking, Iran’s foreign minister Mohammad Javad Zarif struck back at the president’s Twitter threat to target 52 Iranian sites “very fast and very hard” if Tehran strikes US assets.

Mr Zarif accused Mr Trump of having “committed grave breaches” of international law with the killing and of threatening to commit a “war crime” by targeting cultural sites.

“Whether kicking or screaming, end of US malign presence in West Asia has begun,” Mr Zarif tweeted.

Labour’s shadow foreign secretary Emily Thornberry accused the PM of dismissing her concerns that Mr Trump was heading down a dangerous path by working to tear up the nuclear treaty with Iran.

With the US sending 3,000 extra troops to Kuwait, she warned of a “lurch towards war” arising from the president’s “reckless” decision to kill the general who masterminded Iran’s regional security strategy.

The Foreign Office issued strengthened travel advice to Britons across the Middle East including Saudi Arabia and Turkey, while the Navy was to begin accompanying UK-flagged ships through the key oil route of the Strait of Hormuz.

Meanwhile, military chiefs were understood to have ordered 400 soldiers training local forces in Iraq to scrap their duties to switch to “force protection” to defend themselves and British diplomats from revenge strikes.

Mr Johnson was due back in Downing Street on Sunday after celebrating the New Year with in the private island of Mustique with his partner Carrie Symonds.

He was to face a spiralling diplomatic crisis and growing criticism for failing to issue a statement over the air strike.

Outgoing Labour leader Jeremy Corbyn said: “Boris Johnson should have immediately cut short his holiday to deal with an issue that could have grave consequences for the UK and the world.”

Ms Thornberry accused the PM of having “other preoccupations” as he was “sunning himself” while Cabinet Secretary Sir Mark Sedwill chaired Cobra meetings.