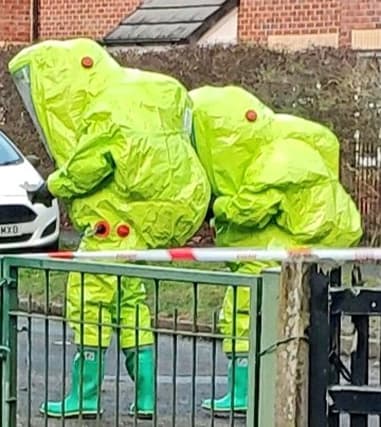 A man is recovering in hospital after consuming castor beans, which contain traces of deadly toxin ricin.

Officers in hazmat suits sealed off a street in south Manchester on Saturday morning following concerns for the welfare of the man.

But on Sunday, Greater Manchester Police (GMP) said the investigation into the incident had ended and there was no longer fears about the health of the man, who is in his 20s.

Police were called by medics to Moor Lane in Northern Moor, Wythenshawe, at 9am after reports the man had consumed an “unknown substance”.

GMP Supt Paul Walker said: “We appreciate the concern of those in the area, and that members of the public may have been alarmed to see emergency services personnel in protective suites.

“However, this was as an appropriate cautionary measure to the incident – during which there was no wider threat to the community.

“I’d like to thank the public for their patience while investigations were brought to a conclusion, particularly those in the immediate vicinity.

“I’d also like to thank our emergency services partners whose care and professionalism brought this incident to a safe conclusion.

“We’re happy to hear that the man has made a good recovery in hospital and we wish him well.”

The castor bean plant is an evergreen herbaceous shrub. While the seeds are safely used to make castor oil, the hull is poisonous.