Labour should have taken a stronger position on Brexit, says Sir Keir Starmer 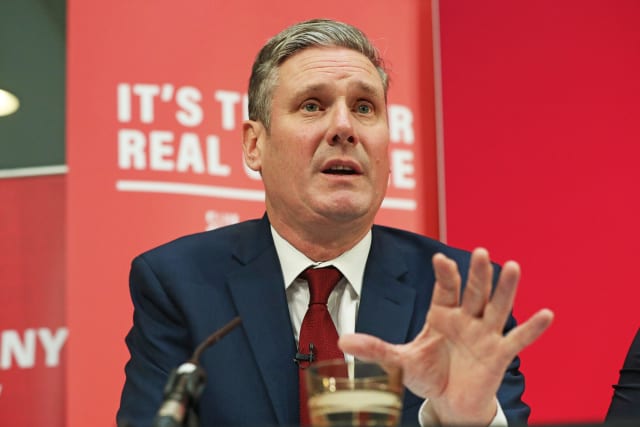 Labour leadership favourite and shadow Brexit Secretary Sir Keir Starmer has said Labour “should have taken a stronger position one way or the other” on Brexit.

Sir Keir said that people wanted “clarity” on the issue, which the Labour Party did not provide, and that not enough was done by the party to “knock down” the Tories’ Get Brexit Done message.

He added that, if he was to become Labour’s new leader, he would deliver the “fundamental change” needed to deal with inequality across the country.

Sir Keir said Labour lost the general election due to four main reasons which cumulatively caused the party to “lose the public’s trust”.

Speaking on Sky’s Ridge On Sunday, he said: “The issues, there were many of them, but they were the leadership, rightly or wrongly, fairly or unfairly, was coming up everywhere.

“Anti-Semitism came up as a question of values and competence, and there was a general feeling that the manifesto was overloaded. They were the four main reasons.”

Sir Keir also outlined what a future Labour government led by him would look like, calling for more long term investment for businesses and the government and private sector to set green targets and requirements together.

But Labour shouldn’t throw away all of the ideas followed by Jeremy Corbyn, he said.

“What Jeremy Corbyn brought to the Labour Party in 2015 was the start of saying we should be anti-austerity and pro public services. That is right. We don’t want to throw that away.

“I’m not pretending we need to keep everything as it is, I’m not pretending there was anything good about that general election result, it was devastating, but we shouldn’t retreat from the radical… fundamental change is needed in this country and we must deliver it,” he said.

Discussing the problems with Labour’s Brexit position, Sir Keir added: “I think clarity about what your position is and not being able to say well would you be leave or remain after a general election was a problem and I made that argument but I accepted the decision.

“I think people wanted clarity and they wanted leadership.

“People had bought the idea that if you vote Tory you’ll get Brexit done and we didn’t knock it down hard enough.”

He also said the argument for a second referendum “blew away” with the election result and that the conversation must “move on” to the framework for future trade relations.

“We’re going to leave the EU in the next few weeks.”

He added: “It is inevitable that Boris Johnson and his Government will look to America for a trade deal, and we need to know the terms of that.”

Pressed on the situation in Iran, Sir Keir accused the Government of “blindly following the Americans” and not providing answers on whether President Donald Trump’s actions were lawful.

“This is a very serious situation and unquestionably blindly following the Americans is in my view the wrong thing to do.”

Asked if he would ever support military action, he added: “I would pass legislation that said military action could be taken if first the lawful case for it was made, secondly there was a viable objective, and thirdly we got the consent of the Commons.

“I think that legislation is much needed,” he said.