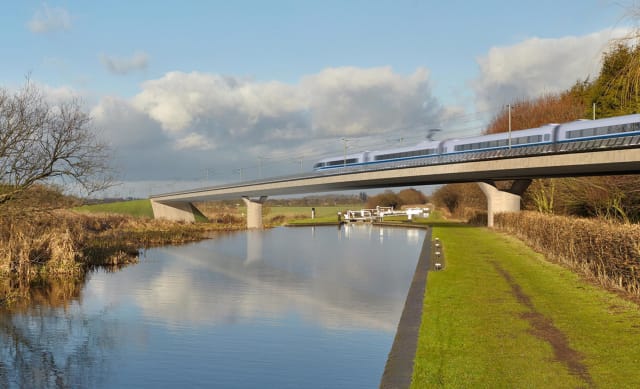 Those in charge of the HS2 project have been been accused of “fiddling the figures” by the deputy chairman of the project’s review panel.

Parliament was “seriously misled” over the costs of HS2, which would be poor value for money and bad for the environment, the former Labour transport spokesman Lord Berkeley has said.

He also accused the project of being “completely out of control financially”.

Lord Berkeley’s comments come after his hard-hitting 70-page dissenting report into the high speed rail proposal was published, listing several grave concerns. Chief among them is the blow-out of estimated costs.

The network was initially expected to cost £50.1 billion. Latest estimates by HS2 Ltd – the private company in charge of the project – put the price at £88 billion. But Lord Berkeley says independent analysis arrives at a figure of at least £107.92 billion.

“I believe that Parliament has been misled because the costs were clearly known to the department, and I believe ministers, three or four years ago – there’s a lot of evidence to that.

“The costs at that stage, they were saying well they were probably over £100bn. Now I think the figure which I believe is about right is £107bn. It’s an enormous figure and Parliament should have had an opportunity to debate this.

“This project is probably two or three times over budget even before the construction has started. Now that’s a completely different level of cost overrun and it does need looking at again,” Lord Berkeley told Sky’s Sophy Ridge On Sunday.

He added: “For me, HS2, if it were almost cancelled except for the bit in the Northern Powerhouse area and replaced by about half the investment on local services, local rail network in the north and the Midlands, it would be much better for everybody who lives up there.

“Saving 50 billion at this stage, I think, is quite something that we’ll want to look at.”

But responding to Lord Berkeley’s comments, Director of the Northern Powerhouse project Henri Murison said they “sound like the views of someone who has always been a sceptic of HS2 simply making the points they’ve made before”.

He added: “He accused the Government and others of misleading Parliament which is wrong, but he also gets the numbers wrong.”

Meanwhile, Foreign Secretary Dominic Raab reiterated that a review of HS2 is under way to “look at the best way to get value for money in relation to that substantial investment”.

Writing in his report, Lord Berkeley said: “Parliament needs one firm figure for the funding envelope at the time when it gives formal approval to cancel or amend a project without wasting large sums of money.”

Lord Berkeley said he wrote his “dissenting” or “minority” report because he disagreed with, and was not given the chance to amend, some conclusions of the draft report overseen by Doug Oakervee, the former HS2 Ltd chairman appointed by Boris Johnson to lead the review into “whether and how we should proceed” with the project.

In his report, Lord Berkeley says he wrote to Mr Oakervee to detail his concerns with the review, including “a bias towards accepting HS2’s evidence in preference to those of others”.

Lord Berkeley said HS2 was planned around a specification “unnecessarily high and expensive”.

“Even before taking into account the much higher scheme costs, the ratio of benefits to costs… is totally false, based as it is on (having) more trains than any other high-speed line can operate, on higher speeds, and on trains running full all day with high-fare paying passengers,” he said.

Lord Berkeley concluded HS2 was “the wrong and expensive solution” to providing better North-South intercity services, adding that it would be “poor value for money”.

He added that information disclosed to the review panel raised “very serious concerns about the competence of HM Treasury and the Department for Transport” in relation to the project, and that of HS2 Ltd.

Phase one of HS2 is planned to run between London and Birmingham. It was initially planned to launch in 2026, but a recent report by HS2 Ltd stated that this could be pushed back until 2031.

An HS2 Ltd spokesman said: “There have been many individual views expressed about the HS2 project, however we await the publication of the Government’s official review.”

A Department for Transport spokesman said: “The Government commissioned the Oakervee review to provide advice on how and whether to proceed with HS2, with an independent panel representing a range of viewpoints… Lord Berkeley’s report represents his personal view.”