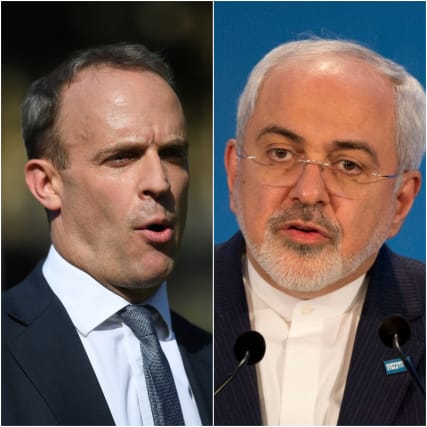 The Foreign Secretary has defended the US over its killing of Iran's top military leader as Tehran ramped up its criticism amid soaring tensions in the Middle East.

Dominic Raab accused hardliners in Tehran of "nefarious behaviour", described General Qassem Soleimani as a "regional menace" and said the United States has the "right of self defence".

But his call for the pursuit of a diplomatic route came as Iran accused Donald Trump of breaching international law in authorising the fatal drone strike, which has created an escalating crisis and sparked fears of all-out war.

Mr Raab on Sunday declined to say the US President was right in his actions but criticised the head of Iran's elite Quds Force who was killed in Iraq on Friday as a "regional menace" who was destabilising the Middle East and "attacking Western countries".

"The US will take their own operational judgment call but they've got the right of self defence," he told Sky's Sophy Ridge on Sunday.

"So we understand the position the US were in and I don't think we should be naive about the Iranian Revolutionary Guard or indeed General Soleimani."

Mr Raab said the case of Nazanin Zaghari-Ratcliffe, the British-Iranian mother jailed in Iran, remained "at the forefront of my mind" and accused hardliners in Tehran of "nefarious behaviour" and not complying with international law.

But he urged a diplomatic route to be pursued to allow "Iran to come in from the international cold".

The Foreign Secretary also defended Boris Johnson, saying he has been in "constant contact" with the Prime Minister who remained "in charge" throughout his Caribbean holiday during the crisis.

Mr Raab, who is due to meet with US Secretary of State Mike Pompeo in Washington on Thursday, said he has been in contact with the Iraqi prime minister and president and will be speaking to Iran's foreign minister.

But, as Mr Raab was speaking, Iran's foreign minister Mohammad Javad Zarif struck back at the president's Twitter threat to target 52 Iranian sites "very fast and very hard" if Tehran strikes US assets.

Mr Zarif accused Mr Trump of having "committed grave breaches" of international law with the killing and of threatening to commit a "war crime" by targeting cultural sites.

"Whether kicking or screaming, end of US malign presence in West Asia has begun," Mr Zarif tweeted.