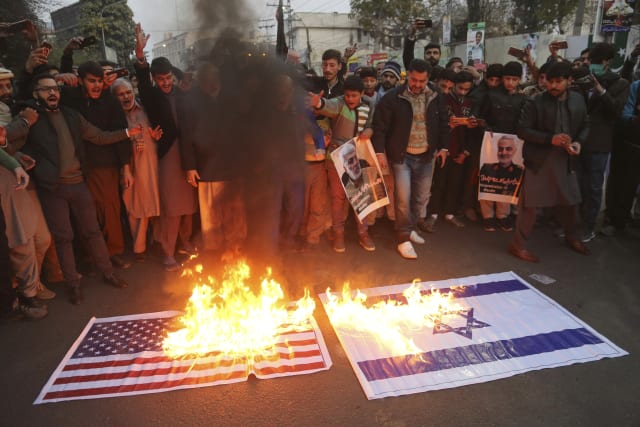 Not since the general election have Britain’s newspaper front pages been so dominated by one issue, as they are on Saturday about the US killing of Iraqi General Qassem Soleimani.

Most of the papers also extensively cover the killing and its potential consequences on the inside pages.

The Daily Mail makes no bones about the issue, warning in an all capitals splash that the UK is “braced for Iran revenge”.

Inside, the Mail warns that drivers “face paying up to £1 more to fill up at the pump due to escalating tensions between the US and Iran”.

The Daily Mirror also reports that petrol prices will rise, and its US editor, Christopher Bucktin, adds that “Donald Trump has plunged the United States and the rest of the world into another crisis”.

The Daily Telegraph quotes an opposing view from Mr Trump, with the US president saying he took action to stop, not start, a war.

Inside the paper, the Telegraph’s defence editor, Con Coughlin, writes that the assassination of Soleimani “sends an unequivocal message to Tehran that it
can no longer threaten the US and its allies with impunity”.

The Daily Express reports that the US “kept Boris Johnson in the dark” about the air strike that killed Soleimani, while a comment piece by Mark Almond of the Crisis Research Institute says that “war with Iran has been creeping ever closer since Donald Trump took office”.

In its editorial, The Guardian says “this is the reckless Trump the rest of the world hoped it would never see in action”, while columnist Jonathan Freedland writes that “Trump’s attack may defy logic, but it’s very much in character”.

The Sun takes an opposing view, reporting on its front page that the “murderer of Brits (has been) wiped out”.

And The Times splashes on the practicalities of what comes next, reporting that the US is rushing 3,000 troops to the Middle East as the crisis grows.