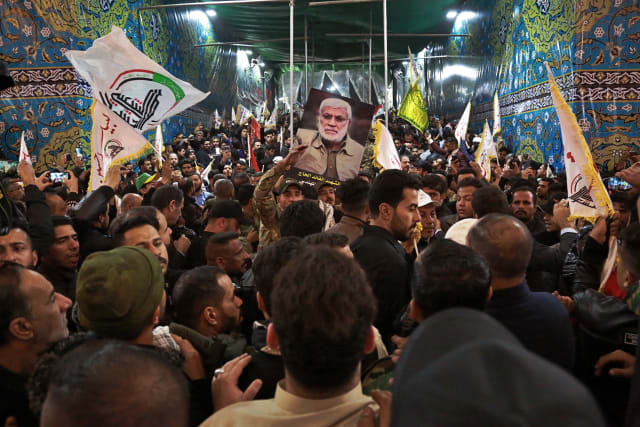 The Royal Navy will accompany ships through the Strait of Hormuz amid soaring tensions in the Middle East, following the US’s fatal drone strike on Iran’s top general.

The imminent move to protect UK-flagged ships came on Saturday as the Foreign Office was strengthening its travel warnings across the region as fears of all-out war heightened.

Tehran was vowing harsh retaliation after President Donald Trump authorised the killing of General Qassem Soleimani, and the US dispatched 3,000 extra troops to Kuwait.

Thousands of supporters chanting “Death to America” marched in a funeral procession through Baghdad a day after the head of the elite Quds Force and regional security mastermind was killed in the Iraqi capital along with several others.

Defence Secretary Ben Wallace continued to urge “all parties” to de-escalate the situation, but appeared to give some backing to the US for the first time as he announced the shipping plan.

He said he had instructed the HMS Montrose frigate and the HMS Defender destroyer to return to the key oil passage imminently, adding: “The Government will take all necessary steps to protect our ships and citizens at this time.”

After speaking to his US counterpart Mark Esper on Friday, Mr Wallace said American forces have been “repeatedly attacked by Iranian-backed militia” in Iraq during “the last few months”.

“General Soleimani has been at the heart of the use of proxies to undermine neighbouring sovereign nations and target Iran’s enemies,” Mr Wallace continued.

“Under international law the United States is entitled to defend itself against those posing an imminent threat to their citizens.”

The practice of escorting ships in the Strait of Hormuz was stood down in November, after being used during the fall-out from the seizure of the British-flagged Stena Impero tanker by Iran in July.

The difference this time, the Ministry of Defence was keen to stress, is UK ships now have a choice to navigate the waters without an escort at their own risk.