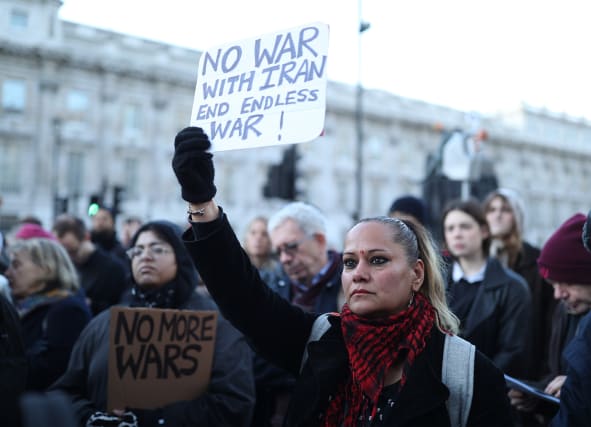 Boris Johnson was preparing to return to the UK amid mounting criticism over his failure to cut short his Caribbean holiday to address soaring tensions in the Middle East.

The Prime Minister remained silent over the US’s fatal strike on Iran’s top general throughout his trip to the private island of Mustique, to celebrate the New Year with his partner Carrie Symonds.

Mr Johnson, who is expected back in Downing Street on Sunday, was under mounting pressure from opposition leaders to make a statement on the killing of General Qassem Soleimani.

There were fears of all-out war after Iran threatened revenge over President Donald Trump’s authorisation of the attack in Baghdad on Friday, and the US sent 3,000 extra troops to Kuwait.

A Government source defended Mr Johnson, saying “he’s been kept fully up to date” including by Foreign Secretary Dominic Raab “at all times”.

“And he will be meeting with ministers on Monday and speaking to foreign leaders over the next few days,” they said.

Jeremy Corbyn said the “assassination” risks “an extremely serious escalation of a dangerous conflict with global consequences by a belligerent US president”.

“Boris Johnson should have immediately cut short his holiday to deal with an issue that could have grave consequences for the UK and the world,” the outgoing Labour leader added.

Shadow foreign secretary Emily Thornberry, who is running to lead Labour, asked “is he afraid of angering Trump?” in an article in The Observer.

“Or is it simply that, as he lounges in the Caribbean sun, he simply does not care, an exact duplicate of the blase approach to Iran that he took in 2018 – when he was foreign secretary and Trump was driving the nuclear deal to destruction – and the previous year when he recklessly jeopardised the fate of Nazanin Zaghari-Ratcliffe?”

Mr Raab was expected to meet his French and German counterparts in the week before speaking to US secretary of state Mike Pompeo in Washington on Thursday.

Mr Raab has called for calm and urged all aggressors to de-escalate following the killing of the head of Iran’s elite Quds Force and mastermind of regional security strategy.

His department issued strengthened travel advice to Britons across the Middle East while the Navy will begin accompanying UK-flagged ships through the key oil route of the Strait of Hormuz.

“The Prime Minister must speak out now and make clear Britain will not support the US in repeating the mistake of the Iraq war.”

Earlier in the day Labour’s John McDonnell vowed during an anti-war protest at Downing Street to press Mr Johnson over the attack, which will “set the Middle East and the globe alight yet again”.

“And it’s not good enough for the UK Government just to appeal for a de-escalation, what we expect the UK Government to do is to come out in total and outright condemnation of this act of violence,” the shadow chancellor said.

Labour’s shadow business secretary Rebecca Long-Bailey, who is expected to enter the Labour leadership race, said: “We stand at a dangerous moment. Boris Johnson must urgently make a statement on what the UK Government is doing to avoid war.”

Labour MP Lisa Nandy, another leadership hopeful, demanded the PM recalls Parliament to explain how he plans to “keep British personnel safe” in the region, where hundreds of UK troops are based.

She said Mr Johnson must outline how he will work with European allies to ensure “a much more international and concerted action to rein in what has been quite a dangerous and reckless act by a president without real thought about what comes next”.