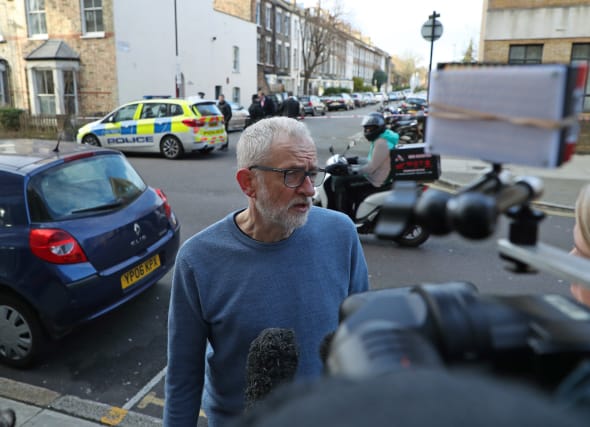 Labour leader Jeremy Corbyn has called for better protection for delivery drivers after a moped rider was stabbed to death in London.

The MP visited the scene of a knife attack in Finsbury Park in which a man in his thirties was killed on Friday night, sparking the Metropolitan Police’s first murder investigation of 2020.

The victim was found on Charteris Road close to the junction with Lennox Road at around 6.50pm.

Friends at the scene on Friday said he was Algerian and worked for Deliveroo and UberEats as a delivery driver.

Speaking at the scene on Saturday, Mr Corbyn, whose Islington North constituency includes Finsbury Park, said: “I am totally shocked. This is a very close-knit community, and this is yet another stabbing on the streets of London.

“People should not be carrying knives. A human life has been taken.

“There are a lot of people working as delivery drivers, they must have better conditions of employment and employers must take more responsibility for their safety too.

“Police cuts have meant fewer officers on the streets, and this raises issues of safety in the community in general.”

He added: “Delivery drivers do a great job in London all of the time. Yet they are vulnerable.

“They’re often on zero hours contracts, yet the food they are carrying is insured.

“So the delivery driver is less valuable than the food they are carrying.

“We need to end the whole culture of gig employment.”

On Friday, fellow delivery riders gathered in Stroud Green Road said he had been the victim of a road rage attack following an altercation with a car driver.

Some of those gathered said they had been repeatedly attacked in the neighbourhood by young gang members – often still in their teens.

A friend said the victim was known as “Taki”, although he was unsure of the English spelling.

“He had been in this country for the last three years but he had been here before for some years before going to Algeria for a while,” he said.

“He had family here, his father was here (at the scene) earlier.”

Many of the riders criticised the companies they worked for and the police for doing nothing to protect them.

The driver who attacked the victim was driving a Volkswagen Caddy, a witness said, and did not try to steal his moped from him.

No arrests have been made and inquiries continue, the Met said.