Timeline leading to the US killing of Iranian general Qassem Soleimani 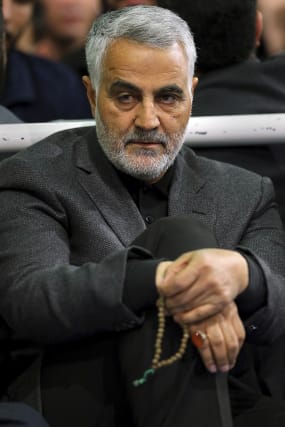 July 25, 2015 – The US, Iran and other world powers including the UK announce an agreement they describe as a “first step” toward preventing Iran from obtaining nuclear weapons.

October 2016 – Presidential candidate Donald Trump says he will withdraw the US from the deal if elected.

May 8, 2018 – President Trump announces the US will withdraw from the Iran deal. Iran, Britain, France and Germany say they will maintain the pact.

August – November 2018 – The US reimposes economic sanctions on Iran, targeting oil, shipping, banking and other sectors.

April 8, 2019 – Mr Trump says he will designate Iran’s Islamic Revolutionary Guards as a foreign terrorist organisation, despite opposition from the US military.

April 22, 2019 – The US says it will end exemptions on sanctions against countries buying oil from Iran.

May 8, 2019 – Iran announces it will increase its production of enriched uranium.

May 12, 2019 – Two oil tankers from Saudi Arabia, and one each from the United Arab Emirates and Norway are attacked in the Persian Gulf. The US blames Iran.

June 20, 2019 – Iran shoots down a US drone it says violated its airspace, which America denies. Mr Trump orders attacks against Iran but cancels them shortly before they were to be launched.

July 1, 2019 – Iran says it has exceeded the amount of low-enriched uranium it was allowed to produce under the 2015 agreement.

July 4, 2019 – British marines seize the Iranian oil tanker Grace 1 in Gibraltar at the request of the US.

July 18, 2019 – Mr Trump says the US navy shot down an Iranian drone that came close to the ship.

July 22, 2019 – Iran arrests 17 of its citizens and charges them with spying for the US. Some were reportedly executed.

December 27, 2019 – An American civilian contractor is killed and several troops injured in a rocket attack in the Iraqi city of Kirkuk. Kataib Hezbollah, an Iran-backed militia group, is blamed.

December 29, 2019 – The US bombs three sites in Iraq and two in Syria which are linked to Kataib Hezbollah, killing 25 people.

December 31, 2019 – Protesters attack the US embassy in Baghdad.

January 2, 2020 – Iranian military leader Qasem Soleimani and five others are killed in a US drone strike at Baghdad airport.