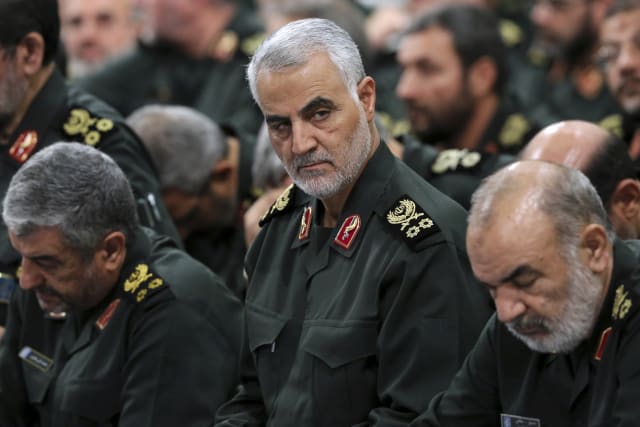 Foreign Secretary Dominic Raab has called for a calming of tensions from all aggressors after the US killed Iran's top general in an airstrike.

General Qassem Soleimani, head of Tehran's elite Quds Force who spearheaded military operations in the Middle East, was targeted in a drone strike at Baghdad's international airport on Friday.

The US Defence Department said Gen Soleimani was targeted because he was "actively developing plans to attack American diplomats and service members" in the region.

Mr Raab issued a statement saying the Government had "always recognised the aggressive threat posed by the Iranian Quds force led" by the general.

"Following his death, we urge all parties to de-escalate. Further conflict is in none of our interests," Mr Raab added.

Labour leadership hopeful Clive Lewis, who served as a Territorial Army officer and completed a tour of duty in Afghanistan, warned that the "violent escalation in an already volatile region is a mistake" which should not be "compounded" by UK support.

"I call on the PM to condemn this cowboy action & turn immediately to our international institutions to try & de-escalate any war with Iran," the former shadow defence secretary tweeted.

"The UK must now lead in being a broker for peace."

Prime Minister Boris Johnson, who has been celebrating New Year on the private Caribbean island of Mustique, is yet to comment.

Labour MP Lisa Nandy, who is also considering a run to replace Jeremy Corbyn, said it is "a very dangerous moment".

She added: "17 years after the catastrophic decision to go to war in Iraq violence still rages every day. World leaders must stand up to (US president Donald) Trump. The last thing we need is another all out war."

Labour's shadow justice secretary Richard Burgon warned that there is a "real risk" Mr Trump will engage in a war with Iran "that would be even worse than that on Iraq".

Stella Creasy, a Labour MP, called for an "urgent statement" from the PM or Foreign Secretary and suggested a recall of Parliament was needed before Tuesday.

"UK Government must condemn it and work with colleagues in the US to counter Trump's reckless and dangerous foreign policy," she added.

Tory MP Tobias Ellwood, a former defence minister who served as a captain in the Army, tweeted "this is big", adding: "Expect repercussions."

Mr Burt, who stood down as a Tory MP at the last election, stressed it is "very important now to concentrate on what happens next, and for everybody involved diplomatically to do everything they can to try and diffuse the situation".

The Foreign Office advises British-Iranian dual nationals against all travel to Iran and for other British nationals to seek the department's advice before travelling to the nation.

British nationals risk being arbitrarily detained or arrested by Tehran, the department warns.

Nazanin Zaghari-Ratcliffe has been among the dual nationals being held in Iran since she was arrested in 2016 and accused of spying while visiting family.