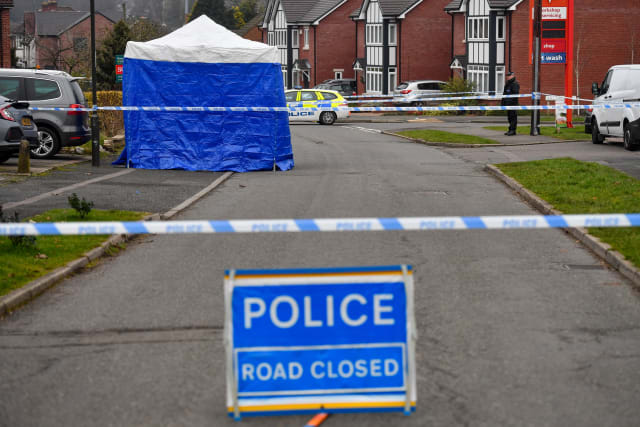 An estranged husband has appeared in court charged with murdering his wife and her lover, both found fatally stabbed at a house on New Year’s Day.

Mrs Hancock, a teacher, and father-of-two Mr Griffiths were discovered with multiple stab wounds at the detached property in New Zealand Lane, Duffield, after police were first called at 4.11am.

Hancock, who had three children – aged nine, four and three – with his wife, appeared at Southern Derbyshire Magistrates’ Court for a brief 10-minute hearing on Friday.

Wearing a black suit blazer, white shirt and appearing unshaved, Hancock appeared in the dock, flanked by security officers, and spoke only to confirm his name, age and nationality.

Prosecutor Jeanette Stevenson confirmed to the court that Hancock, a head teacher, had been “compliant with police on arrest and throughout the whole process”.

Magistrates were told how officers arriving at the home found and arrested Hancock outside the address.

Once inside, police went to a bedroom where they discovered Mr Griffiths, who was already deceased, and the gravely injured Mrs Hancock.

Paramedics battled unsuccessfully for 15 minutes to save her, the court heard.

Nobody else was in the house at the time and the children had been staying with a grandparent at the time of the incident, magistrates were told.

Ms Stevenson said that the defendant and Mrs Hancock had separated “some time ago”, describing Mr Griffiths as her “new partner”.

Hancock was remanded in custody to appear at Derby Crown Court on Monday.

Following the hearing, Derbyshire Police issued a fresh appeal for witnesses who may have spoken to either Hancock or the two victims in the days leading up to New Year’s Eve.

Detective Inspector Steve Shaw said: “As with any investigation, it is vital that a full picture of the incident is able to be established.

“That is why I am asking for anyone who may have had contact with Rhys Hancock, Helen Hancock or Martin Griffiths in the days prior to the incident to get in contact.

“In particular, we are interested to hear from anyone who spoke with Rhys Hancock on New Year’s Eve.”

On Friday, Fountains High School in Burton-upon-Trent, Staffordshire, issued a tribute to Mrs Hancock, who worked at the school as a PE teacher.

In the statement, the school said: “We are all deeply saddened by the tragic news of Helen’s death.

“She was a well-liked member of staff who made a real difference to the pupils she taught here at school.

“Our thoughts and prayers are with Helen’s family and friends at this tragic time while we help pupils, parents and staff come to terms with this truly awful news.”

Colleagues of Mr Griffiths, who worked at Derby-based creative design agency 22 Create, said news of the incident had come as a “huge shock”.

Chris West, a director at the company, said: “Martin was a highly valued colleague, mentor to my team and above all good friend to us all.

“He thoroughly enjoyed his work in marketing and inspired many with his enthusiasm, positivity and ideas.

“We are grateful for all the messages of support from clients and the local business community alike.”

Paying tribute in a statement issued by police earlier this week, the family of Mrs Hancock said: “The family are devastated at the loss of Helen, who was a lovely, beautiful, friendly, bubbly and social person.”

Mr Griffiths’s family, also paying tribute, said: “Martin was a lovely dad, husband, son, brother and uncle, who had a passion for adventure, running and a love of animals.”

Derbyshire Police has referred itself to the Independent Office for Police Conduct due to contact between Mrs Hancock and its officers before the incident.