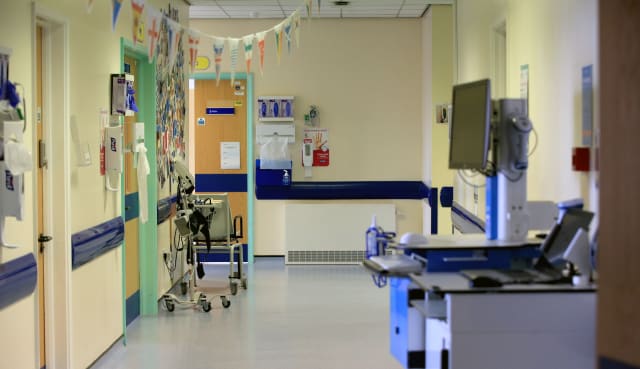 Children with rare diseases in England are among the first in the world to be receiving a form of DNA testing that can improve and speed up diagnoses.

Whole exome sequencing looks for thousands of rare conditions in a single test by identifying genetic mutations in a patient’s DNA.

Eighty babies and children have been tested since it was rolled out on the NHS on October 1 last year, just under half of whom received diagnoses.

It is being routinely offered to children in neonatal or paediatric intensive care units when clinicians suspect they have a genetic condition.

NHS England says it hopes up to 700 children will benefit each year from the tests, which cost around £2,000 and may more than double the chance of a successful diagnosis.

The test, delivered by the South West Genomic Laboratory Hub, looks for mutations in pieces of an individual’s DNA that provide instructions for making proteins, usually taken from a blood sample.

The majority of disease-causing variants are thought to lie within these regions, collectively known as the exome.

The technique, pioneered by scientists in Exeter, is faster than standard genetic tests which are usually limited to looking for specific conditions one after the other.

These are said to result in a successful diagnosis around 20% of the time, compared to just under half (37) of the children who underwent whole exome sequencing.

The new tests can also help show which patients are unlikely to respond to certain treatments – saving children from unnecessary medication and potential side effects.

Henry Dunn had the test aged 20 months having experienced a range of undiagnosed problems and a prolonged spell in hospital after he was born.

Within a week he was diagnosed with Costello syndrome – a rare disease that can affect multiple organ systems and leads to an increased risk of childhood cancer.

He was closely monitored and on the two occasions he developed cancer it was detected early and successfully treated.

Henry, now four, is in remission.

His mother, Lauren Dunn, from Exeter, said: “Without the exome sequencing, Henry’s diagnoses of rhabdomyosarcoma and liver cancer and treatment for these would likely have been delayed.

“Knowing that Henry has Costello syndrome provided the missing piece of the puzzle and means that he receives the medical management that he needs to make sure his needs are met and to help him achieve his full potential.”

NHS England chief executive Sir Simon Stevens said: “Once again the NHS is at the forefront of the genomic revolution with patients in England the first to be routinely offered this cutting edge treatment as part of the Long Term Plan.

“This quick and accurate new test means rapid diagnosis and reassurance for families when they need it most and give babies and children the best chance of a healthy and happy life.

“In the last year alone, scores of patients have received game-changing new treatments such as CAR-T therapy and targeted radiotherapy at the NHS’s new £125 million Proton Beam centre.

“Over the next decade the NHS will continue to expand the range of personalised, precision medicines, including rolling out genomic testing to all people with rare diseases and patients with cancer.”

Health Secretary Matt Hancock said: “The pain for families seeking a diagnosis for their sick children is unimaginable.

“These cutting-edge DNA tests will much more rapidly diagnose rare diseases, helping to put an end to uncertainty and allowing children to receive the best possible treatment.”