Thousands of performers from across the world took to the streets of the capital for the 34th London New Year's Day parade.

An estimated 500,000-strong crowd lined the streets of London, from Green Park to Parliament Square, for the parade on Wednesday which included performers from the UK, Europe and the US. 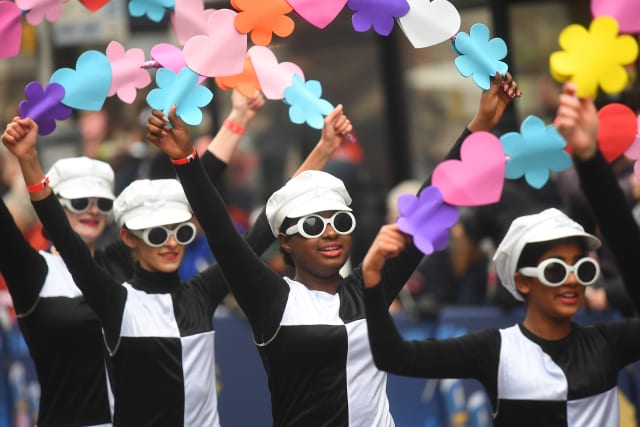 Organisers said there were about 10,000 performers including marching bands, samba bands, cheerleaders and dancers.

The Miniature Steamers for Charity rode six small steam engines through the streets, while motorbike stunt performers from Moto-Stunts International performed daring tricks, including leaping from a ramp at the back of a car.

Riders from All The Queen's Horses, wearing a variety of brightly coloured jockey outfits, rode some 60 horses through the streets.

Performers in checked outfits and sporting colourful capes raced through the streets on rollerskates, rollerblades and skateboards.

The march started near Green Park at midday, went along Piccadilly, Pall Mall, Trafalgar Square, Whitehall and on to Parliament Square.

Since the inaugural parade in 1987, the event has raised more than £1.5 million for London charities.