What is a civil partnership and how is it different to marriage? 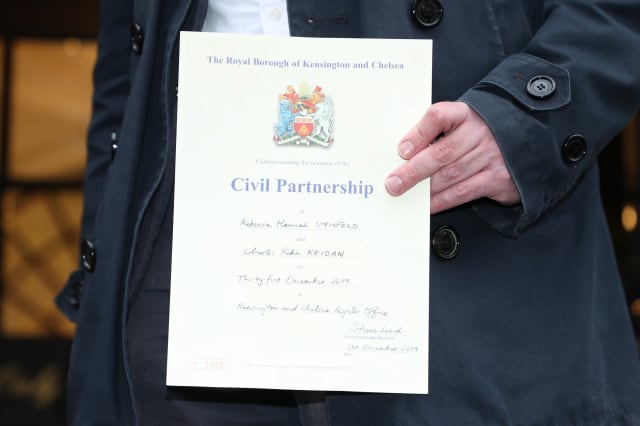 Heterosexual couples across England and Wales are now able to enter into a civil partnership.

A change in legislation means that mixed-sex couples can become civil partners as opposed to husband and wife – an option previously only eligible for same-sex partners.

What is a civil partnership?

A civil partnership gives a relationship legal recognition – in terms of legal rights as well as legal responsibilities – that is similar to a marriage.

This style of union was first legalised for same-sex couples under the Civil Partnership Act 2004, which provided a legal mechanism to recognise same-sex relationships.

What are the similarities and differences?

Although there are not many day-to-day differences between marriage and a civil partnership, civil partners cannot call themselves “married” for legal purposes.

Georgina Hamblin, head of London Family at divorce lawyers Vardags, says the legal and financial protections for civil partners “is virtually identical to that of married couples”.

“So civil partnerships should not be seen as the softer and less significant option,” she added.

Mixed-sex civil partners will have similar rights and entitlements as married couples, such as marriage allowance tax relief, exemption from inheritance tax and joint parental responsibility for children.

Why do heterosexual couples want a civil partnership?

Campaigners say a civil partnership offers the legal security of marriage without concerns over religion and gender inequality.

Ms Hamblin believes that couples opting out of marriage often put themselves and their children at the risk of financial peril in the event of a relationship breakdown.

“It is quite amazing how many people still believe in the myth of the “common law marriage” and that after a handful of years you get some ‘rights’ against the other,” she said.

“This is just not true and is a very dangerous assumption that I see playing out with devastating results very regularly as a divorce lawyer.

“It is my hope that with this new, gender-equal, blank canvas available, cohabiting heterosexual couples will seize their opportunity now to show their commitment to each other whilst providing financial security for their partners and their children.”