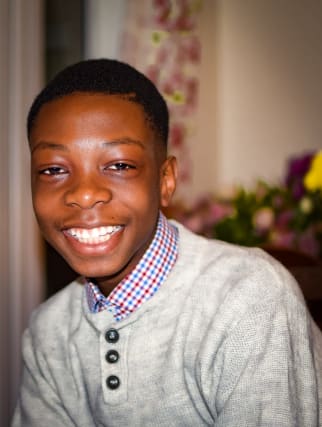 A teenager is using his love of music and literature to inspire young people from his community and start a conversation on the “importance” of mentorship in tackling gang violence.

Gabriel Dedji, 17, from Enfield, north London, published his book, The Escape, on October 29 after two years of “planning and grafting”.

The book, which he kept a secret from his friends and family, tells the story of a young man who falls into a cycle of violence until he meets a “mystical” stranger named King Keys who helps guide him on to a better path.

Readers are introduced to the “mystical” man in chapter one, when he helps stop a violent fight using music.

The “traditional Afro-beat and jazz” sound distracts the youths, causing their bodies to “freeze”, afraid of who was watching them.

Asked why he focused on the topic of gang violence, Gabriel said: “All writers are inspired by their environment, and the theme of searching for an end to youth violence is everywhere.

“I had already created a character who seeks to solve social issues through his mystical creativity so the two themes went hand in hand.

“I haven’t directly experienced gang violence but it is something we’re constantly hearing about and how it affects young people like myself.”

The book, published by Austin Macauley Publishers, also focuses on the lack of mentoring within communities.

Gabriel said he believes “the lack of mentorship is partially to blame for a lot of the problems we have in our community”.

He added: “Having more teachers, community leaders and youth workers who are gifted in the arts can help to offer a creative outlet for young people suffering internally.

“Guiding young people towards a positive future and helping them to spend their time wisely is key to solving many of the world’s issues.”

Although he admits the book is not a guide on how to flee violence or survive in life, the teenager said the book does seek to highlight and discuss how to express yourself through creative outlets.

The student will be speaking in schools across north London from next year and hopes his book will be put into school libraries across the capital.

He told the PA news agency: “I hope that The Escape sparks a creative light in all my readers, just as books from Malorie Blackman and Benjamin Zephanaiah did when I took them from my primary school bookshelves.”

– The book can be found in various stores including Waterstones and Ebooks.