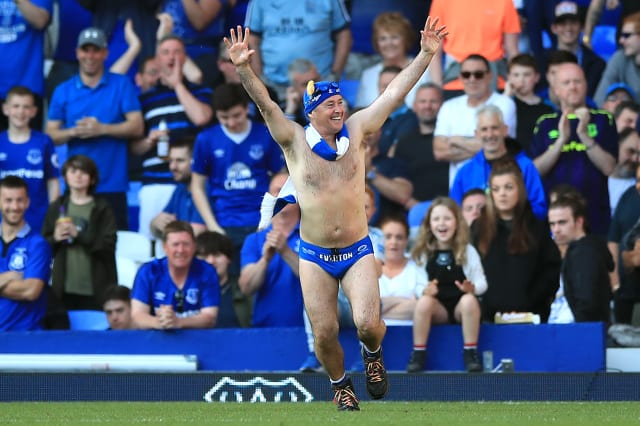 Liverpudlian Michael Cullen, who is better known as Speedo Mick, is walking from John o' Groats to Land's End throughout December and January.

He is raising money for community projects for disadvantaged young people.

"I've paid for one hotel and every place that I end up at somebody's put me up, given me some food, given me a bed to sleep in.

"Everybody's beeping – it's just beep, beep, beep in the cars. It just makes everybody smile. There's just something beautiful about it."

Mr Cullen first earned the nickname Speedo Mick after swimming the English Channel for charity in his trunks five years ago – then turning up to Everton's Goodison Park ground in the same outfit to raise money.

Since then he has done a number of charity walks in his trademark swimming gear and continues to don the Speedos whenever he goes to Everton matches to raise more money.

"I always go with a bucket in my hand and sparsely clad."

Previous walks have included Goodison Park to Lyon and Buckingham Palace to Liverpool – all while wearing his Speedos.

"I'll tell you, I've seen them curtains twitching in the palace when I was outside," he said.

He is taking what he describes as a zigzag route to make up the extra miles and has already experienced some picturesque Highland countryside, swimming in a loch and even having a close encounter with a deer.

He has had two rest days so far – but did not stop for Christmas.

"I never took a break for Christmas Day," he said.

"I walked through Glasgow town centre in my speedos and my Christmas hat on Christmas Day and I was put up in a house and they gave me a big Christmas dinner and everything."

Thankfully for those he is encountering along the way, Mr Cullen is carrying seven pairs of his famous Everton-themed trunks so they can be changed daily and washed regularly.

But while most people he has encountered have been friendly, there has been concern from some quarters.

He said: "The police have come and seen me three times – they've just been dead concerned, they've been dead nice.

"They've just gone: 'Are you OK?' Because they think I might have just walked out of my house without my clothes and there might be something wrong.

One significant landmark on the journey will be his home city of Liverpool, where he hopes to be on Sunday – when there just so happens to be a Merseyside derby taking place at Anfield in the FA Cup.

"I think it's going to be absolutely crazy," he said.

"There's that much support that I'm expecting a lot of people joining in on the walk and it's going to be a little bit like Forrest Gump."

You can sponsor Speedo Mick at https://www.gofundme.com/f/speedomick-1000-ml-charity-walk

Starmer says Johnson won because Labour ‘made him look good’