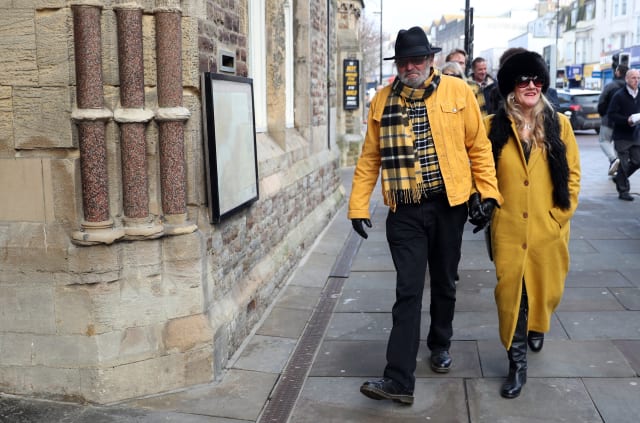 A heterosexual couple who were among the first to enter into a civil partnership have hailed the law change for young people who “don’t have to go up the aisle if they don’t want to”.

Ann “Pee-Wee” Chamings and her partner John Eccles tied the knot in a civil ceremony on New Year’s Eve, marking the first day such unions became a legal alternative for mixed-sex couples.

The East Sussex pair were among those who took the fight for opposite-sex civil partnerships to the Royal Courts of Justice in London, pushing for a change in the law.

Ms Chamings said the ceremony at Hastings Town Hall, witnessed by their two children, was “just ideal” for the couple, who first met in 1975 and have been together for 43 years.

“Absolutely happy that we managed to get to this point, it’s not that I don’t believe in marriage, I think marriage is fine for some people, but it has connotations of patriarchal and religious associations that really didn’t suit us,” she told the PA news agency.

“This now gives us rights, we now finally have the rights that other people had, this has been common in Europe for years.

“And thanks to Rebecca and Charles, we’ve got those rights too.”

Rebecca Steinfeld and Charles Keidan, who also entered into a mixed-sex union on Tuesday, won a legal bid at the Supreme Court in 2018 following a five-year legal battle.

Ms Chamings, 70, said that while she was growing up, marriage appeared to be “a kind of union where men dominated, and you had to sacrifice your name”.

“I felt very early on I never wanted to do that and my partner John agreed with me, and we’ve just soldiered on through our lives together,” she told PA.

“I’m so glad for young couples starting out now that they don’t have to go up the aisle if they don’t want to.

“I really couldn’t see myself ever doing that, with some kind of meringue dress on or anything like that.

“We were able to have this simple contract which we signed a piece of paper basically and we played some loud music and it was great.”

The East Sussex couple walked in to Be My Baby by The Ronettes and wore matching black and yellow outfits, before celebrating at the pub afterwards.

Despite her choice to enter into a civil partnership, Ms Chamings said she was not campaigning against marriage.

“I’m just wanting equality for everybody who doesn’t really feel comfortable with that,” she told PA.

“And that’s what’s been achieved today. We could have actually been wiped out in the car on the way to the ceremony and would not have had any rights.

“But once we walked out of that door, we had the same rights as everybody else. It’s a great moment.”