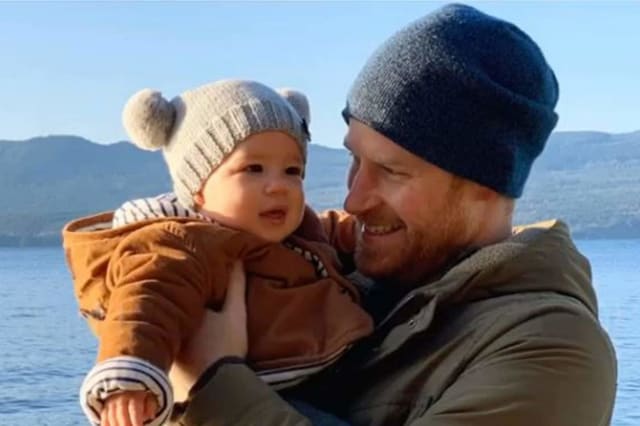 Baby Archie enjoys a cuddle with his dad beside calm blue waters in a new photograph released by the Duke and Duchess of Sussex to mark the turn of the year.

The image of their seven-month-old son Archie Mountbatten-Windsor in the arms of the duke came at the end of an Instagram compilation summarising their 2019.

Archie can be seen wrapped up in a brown coat and boots with a grey bobble hat, as Harry holds him up and smiles proudly, with doting mum Meghan likely to be behind the camera.

With Coldplay's 2002 hit, Clocks, playing as background music, the video flicks through images of the couple's favourite moments of the past year.

The royals posted a caption alongside the video wishing "health and continued happiness" in the new year for everyone whose lives they have touched.

Their caption read: "Wishing you all a very Happy New Year and thanking you for your continued support!

"We've loved meeting so many of you from around the world and can't wait to meet many more of you next year.

"We hope 2020 brings each of you health and continued happiness."

Harry and Meghan gave a "special thanks to Chris Martin and Coldplay" for allowing them to use their music.

The royals have had a turbulent year, with the high point being the arrival of baby Archie on May 6 weighing 7lb 3oz.

Two days later baby Archie was introduced to the world at a photocall in the Castle's St George's Hall, with Meghan declaring: "It's magic, it's pretty amazing. I have the two best guys in the world so I'm really happy."

Archie was not entitled to be an HRH nor a prince.

Harry and Meghan chose not to use the courtesy title Earl Dumbarton, which Archie was allowed to use, nor to style him Lord Archie Mountbatten-Windsor, making a personal decision he should be a plain Master.

But there were also lows, which included rows over privacy, rifts with relatives, the launch of legal action and an attack on the press which overshadowed an official royal tour.