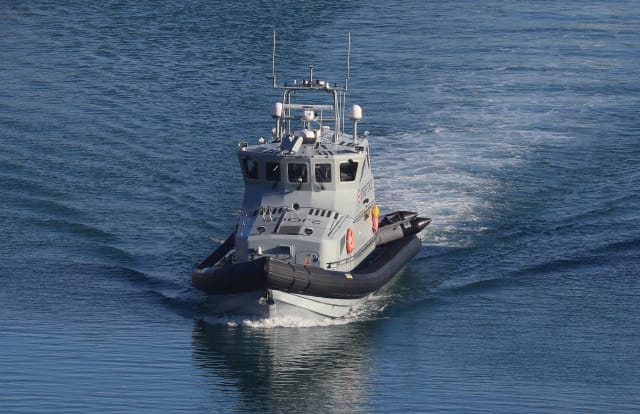 More than 40 migrants, including eight children, have been intercepted by the Border Force attempting to cross the English Channel.

The Coastguard helped rescue the occupants of the three boats off the coast at Dover on Tuesday morning.

A total of 12 men, who presented themselves as Iranian, were detained on board a rigid-hulled inflatable boat (Rhib) at about 3.35am.

A Home Office spokesman said: “All those found were taken to Dover, where they were medically assessed, before being transferred to immigration officials to be interviewed.

“Eight of the people from the second boat claimed to be minors and, subject to age assessment, will be transferred into the care of social services. The cases of all 43 people will be dealt with according to the immigration rules.”

The spokesman added that another small boat was intercepted by the French authorities and returned to France.

He added: “Illegal migration is a criminal activity. Those who seek to come to the UK unlawfully and the ruthless criminals who facilitate journeys are all breaking the law and endangering lives.

“We will always ensure we have the right resources in place to keep our border secure.

“A 42m Border Force cutter and two coastal patrol vessels are patrolling the Channel and we are monitoring the situation closely over the Christmas and new year period.

“There has also been a doubling of patrols on French beaches and drones, specialist vehicles and detection equipment have been deployed to stop small boats leaving French shores and arriving in the UK illegally.

“Individuals who reach the UK illegally should be in no doubt about our determination to return them to Europe as it is an established principle that those in need of protection should claim asylum in the first safe country they reach.”

The spokesman added that 125 migrants who had entered the UK illegally since January 2019 had been returned to Europe.

A Coastguard spokeswoman said: “We are only concerned with preservation of life, rescuing those in trouble and bringing them safely back to shore, where they will be handed over to the relevant partner emergency services or authorities.”

Natalie Elphicke, MP for Dover and Deal, said: “These latest arrivals yet again underline the need for a fresh approach – that anyone picked up in the English Channel is returned to the safety of France.

“This would be the surest deterrent and the most compassionate thing to do. For only when migrants and traffickers alike know that they will not succeed will they stop attempting these very dangerous crossings that have already seen life lost.”

The incidents come after more than 60 migrants were rescued by the French and British authorities on Sunday.