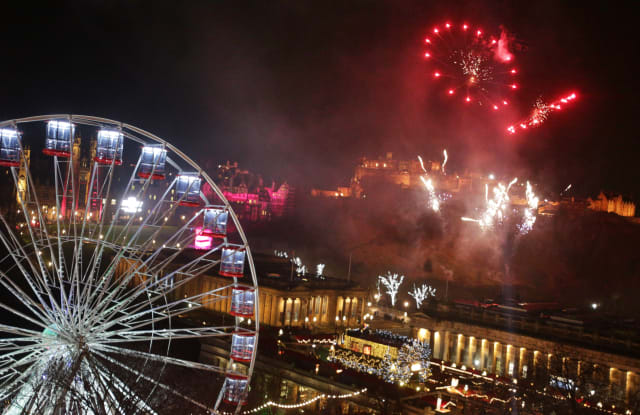 Fireworks lit up the Edinburgh sky as tens of thousands welcomed the start of a new decade at Hogmanay celebrations.

Auld Lang Syne rang out to begin the year 2020, sung by revellers packing the Scottish capital’s streets for a Hogmanay party that had included a night of music, parties and more than 3,600 fireworks let off from Edinburgh castle.

Performances from Idlewild, Rudimental and Marc Almond featured across stages throughout the city centre, while DJ Mark Ronson created a soundtrack as the clock struck 12.

An estimated 100,000 visitors were expected to attend the event, according to organisers who billed the Hogmanay celebrations were the UK’s biggest New Year’s Eve street party.

There had been criticism of the event’s organisation, amid uncertainty around how many passes residents were allowed, with Underbelly – who also run the Edinburgh Festival Fringe – accused of creating “unnecessary confusion” by the council leader.

The festivities began in the city on Monday as around 40,000 people joined a torchlit procession which culminated in them forming the shape of two humans reaching out a “hand of friendship”.

Leading the parade down the Royal Mile and into Holyrood Park was a 40-strong cast from Celtic Fire Theatre company PyroCeltica.

TV stars Ant and Dec took to the stage in Princes Street Gardens early on Tuesday evening as crowds gathered, playing music and introducing the first firework display of the night.

Street theatre, circus acts and musical performances also took place across more than a dozen streets, including the city’s main thoroughfare Princes Street and its adjacent gardens, while ceilidhs danced their way into the night in the shadow of Edinburgh Castle.

The words will illuminate and animate landmarks around the city, centred around a maritime theme, and will run until January 25.