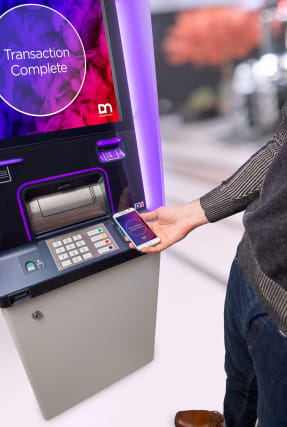 Bank customers will be able to walk up to a high street cash machine and apply for a loan or have a video chat with a mortgage adviser under a bold five-year vision set out by the world’s largest maker of ATMs.

Matt Phillips, the UK boss of Diebold Nixdorf, told the PA news agency the firm is already in talks with banks about launching self-serve ATMs that will be able to carry out a raft of basic banking services.

He said Britons will see these ATMs hit the high streets “absolutely” within five years as banks increasingly take the axe to their branch networks amid a push towards online banking.

It comes amid fears over access to cash across the UK as the removal of fee-free ATMs and branches are said to be creating “cash deserts” in many small communities.

From ID checks for loan applications to customer service video chats, the ATM of the future is set to help bridge the gap left by the closure of many full-service bank branches, according to Mr Phillips.

He said while losing a bank branch is an “emotive topic” for many communities, self-serve ATMs will help give vital access to cash and complement banking services, rather than replace them.

“We do see the evolution of the ATM bridging that… customer experience,” he said.

Diebold Nixdorf – which holds a 25% share of the UK ATM market – said that banks are set to concentrate face-to-face customer service efforts on their customers’ major transactions and financial decisions.

“Banks want to become more meaningful to customers – to be there for the big moments in their life,” said Mr Phillips.

But he stressed the vision is not to accelerate the decline of the bank branch, with self-service acting as a “core part of the branches that we know and love”.

Security will be vital, however, and Diebold Nixdorf said these types of services would likely need to be offered from ATMs in small bank branches or similar locations rather than from “hole in the wall” machines.

Diebold Nixdorf has more than two million ATMs and retail cash registers installed worldwide, with some 75 million people using its technology every day.

It has a presence in more than 100 countries and around 23,000 employees worldwide.