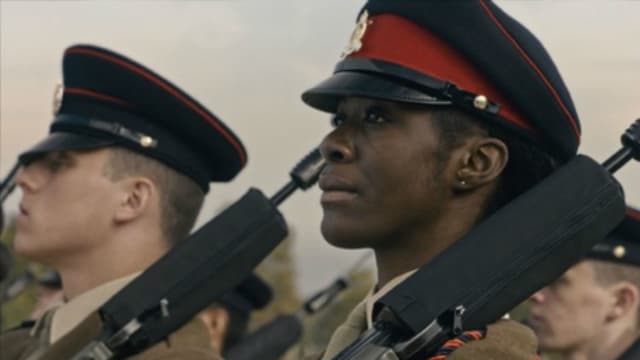 The Army is appealing to followers of fast fashion, social media addicts and gym monkeys in a new recruitment drive.

The campaign aims to show how a career in the Army can build lifelong self-confidence in contrast to the short-term boosts that can be found in modern society.

Colonel Nick MacKenzie, head of Army recruiting, said the new campaign aims “to highlight that a career in the Army not only provides exciting opportunities, challenges and adventures but it also gives you a lasting confidence that is hard to find in any other profession”.

He added: “This campaign tells a story of character built on camaraderie and encouragement, of unshakeable self-confidence built on overcoming challenges.”

One of the images featured in the campaign is a collage of muscular body parts accompanied by the tagline: “Confidence can be built for a summertime or it can last a lifetime.”

Another, which depicts emojis, reads: “Confidence can last as long as a like or it can last a lifetime.”

The decision was underpinned by 2018 research by The Prince’s Trust which found that 54% of 16 to 25-year-olds believe a lack of self-confidence holds them back.

Defence Secretary Ben Wallace said: “I know from my own experience the confidence, self-belief and camaraderie a career in the armed forces can offer.

“The latest Army recruitment campaign reflects these unique opportunities and I hope it will build on the success of last year’s campaign, which led to a record number of applications in recent years.”

This year’s recruitment drive follows the controversial “Your Army Needs You” campaign, which was based on the historic Your Country Needs You First World War poster featuring a stern-eyed British field marshal.

The billboards called out to “Me Me Me Millennials”, “Class Clowns”, “Binge Gamers”, “Phone Zombies”, “Snow Flakes” and “Selfie Addicts” and said the Army needed their potential and assets. These were named as self-belief, spirit, drive, focus, compassion and confidence.

Following the campaign, 90,000 people applied to join the Army, meaning it is 90% towards meeting its annual recruitment target, which runs until April.

However, the armed forces have faced a staffing crisis in recent years with figures indicating a decline in the number of soldiers, prompting criticism of the MoD’s outsourcing company Capita which was tasked with recruitment.

In August The Guardian reported that some Army combat regiments are operating at almost 40% less than their required strength and numbers in infantry units have been consistently falling over the last five years.