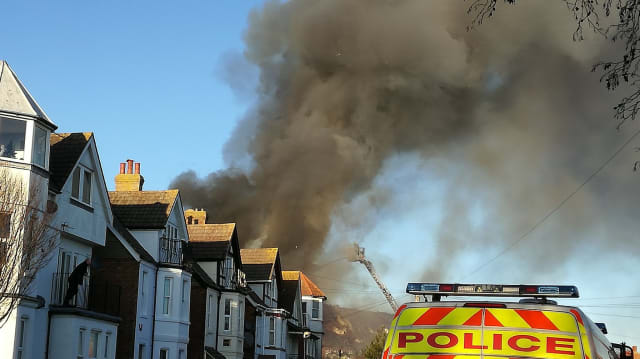 Two people have been taken to hospital after a large house fire broke out in Folkestone.

Large plumes of smoke could be seen across the Kent town during the blaze at the property in Wear Bay Crescent on Monday afternoon.

A total of eight fire engines as well as ambulances and police attended the scene of the fire.

A Kent Fire and Rescue Service spokesman said: “Eight fire engines have been sent to the scene and firefighters are advising the public to avoid the area whilst crews tackle the blaze.

“A height vehicle and bulk water carrier have also been sent to the scene.”

A South East Coast Ambulance Service spokesman said: “We have had one ambulance crew and one car attend along with a hazardous area response team (HART).

“We have taken two patients to hospital with minor injuries. No further casualties at this time have been reported.

“We are remaining on scene to support the fire service as they tackle the fire.”