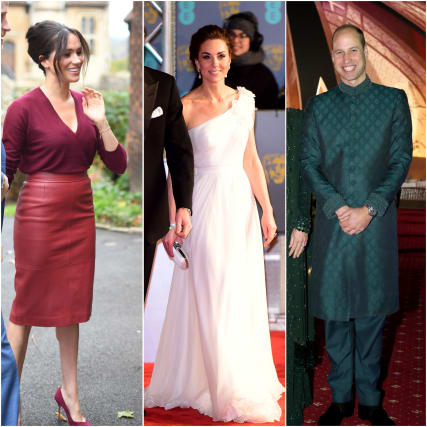 The royals showcased glamorous gowns and on-trend day wear this year, with the Duchesses of Cambridge and Sussex heralded for their sartorial style.

But the Queen, the Duchess of Cornwall and even the Duke of Cambridge also received praised for their royal wardrobes.

Here’s some of the top fashion choices of 2019.

– Kate at the Baftas

The duchess looked every inch a movie star in a white one-shouldered Alexander McQueen gown when she joined William at the Bafta film awards in February 2019.

The duchess’s departure from her go-to day dresses in favour of a lilac Gucci bow blouse – worn back to front – and high-waisted wide-leg trousers was also a hit.

Another follower of Kate’s fashion, Charlotte Crawley of the @HRHDuchesskate blog, said the duchess’s new style worn at the Henry Fawcett Centre in March was a surprise for royal fans.

“Kate added her own stamp to the blouse by wearing it with the buttons to the front … It was a very fresh but professional look for her,” she said.

Kate stepped out in a floral dress by high street American brand Michael Kors when she accompanied her daughter Princess Charlotte on her first day at Thomas’s Battersea school.

“This look really showcased how masterful Kate is when choosing an outfit for an iconic photograph,” she told PA.

She added: “Although most mums don’t wear heels and a dress on the school run, they still felt a connection with the future Queen taking part in a very normal parent experience.”

The duchess was the epitome of royal elegance in an ombre aqua shalwar kameez as she arrived for her royal tour of Pakistan.

The duchess’s bespoke outfit by Catherine Walker – one of Diana, Princess of Wales’s favourite designers – was fashioned with a drape which extended to the back.

Elizabeth Vollman described it as beautiful, saying it reflected the culture of the host nation with a western twist.

– Meghan with Archie at Windsor Castle

Meghan chose a trench-style cream dress by Grace Wales Bonner for her first appearance with her newborn son.

“Women all around the world rejoiced seeing the Duchess of Sussex looking so normal, healthy, and beautiful in a Grace Wales Bonner dress that accentuated her three-day postpartum body,” she said.

“The creamy neutral shade of the dress popped against the dramatic Windsor Castle backdrop and co-ordinated with Archie’s knitted blanket and hat.”

The duchess also wowed in a v-neck Joseph sweater, burgundy leather Hugo Boss skirt and Sarah Flint heels at a round table discussion on gender equality at Windsor Castle in October.

Ms Crawley, who also writes the @MadAboutMeghan blog, said it was her favourite Meghan look.

“The combination of the ruby and garnet shades made for an effortlessly chic combination.”

She added: “We often see the Duchess select neutral shades – the pop of colour worked beautifully.”

– The Queen during Holyrood week

The monarch’s lemon and white embroidered coat was classic Queen – bright block colour with a matching hat, contrasting against the red coats of the Guard of Honour during the Ceremony of the Keys at the Palace of Holyroodhouse in Edinburgh in June.

Ms Crawley described it as a stand-out look, teamed with a “summery floral hat and beautiful jewellery including Queen Victoria’s Bow Brooch and her three stand pearl necklace”.

– The Queen switches to faux fur

The monarch’s decision not to use real fur in new pieces from this year onwards was hailed as a modern fashion choice.

Christine Ross said: “Although Her Majesty may continue to wear older fur pieces, this public declaration against fur pushed the conversation on ethical fashion to the forefront.

“In a subtle way, the Queen used her fashion choices to make a political statement, without ever speaking at all.”

– Camilla in a jumpsuit

Camilla won praise for an Anna Valentine jumpsuit debuted on her royal tour to New Zealand in November.

Ms Crawley said: “The Duchess of Cornwall looked smashing in a navy jumpsuit by one of her favourite designers… It was a lovely evening option, I particularly liked the sleeve detailing.”

– William in a sherwani

Future king William turned heads when he stepped from a tuk tuk in Islamabad, dressed in a traditional sherwani, during his tour of Pakistan.

While Kate dazzled in an emerald green gown,  the duke switched up his style, wearing the knee-length buttoned teal coat made of embroidered fabric by Karachi-based designer Naushemian, rather than regular black tie.