A gunman killed two people at a Texas church before he was shot to death by congregants who fired back.

Authorities praised the two congregants who opened fire as part of a volunteer security team at West Freeway Church of Christ in White Settlement.

Lieutenant governor Dan Patrick said: "This team responded quickly and within six seconds, the shooting was over. Two of the parishioners who were volunteers of the security force drew their weapons and took out the killer immediately, saving untold number of lives."

Britt Farmer, senior minister of the church, said: "We lost two great men today, but it could have been a lot worse."

Authorities said there were more than 240 parishioners in the West Freeway Church at the time of the shooting.

White Settlement Police Department chief JP Bevering said the gunman had sat down in a pew before getting up, taking out a shotgun and firing at a parishioner, who was killed. He said the church's security team then "eliminated the threat". 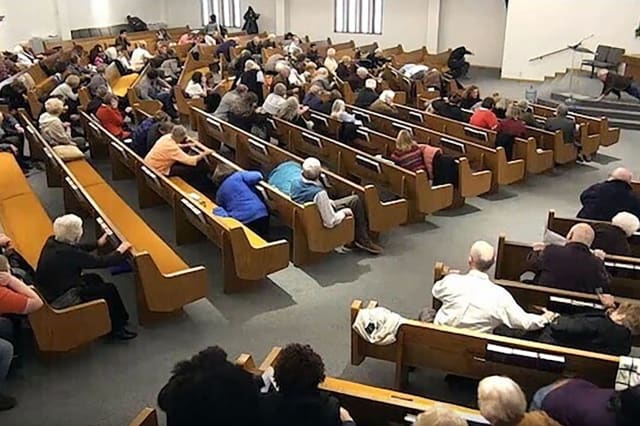 Officials have not released the names of the victims or the gunman. FBI special agent in charge Matthew DeSarno said they are working to identify the gunman's motive, adding that he is "relatively transient" but had roots in the area.

Mr DeSarno also said the gunman had been arrested multiple times in the past but declined to give details.

In a livestream of the church service, the gunman can be seen getting up from a pew and talking to someone at the back of the church before pulling out a gun and opening fire. Parishioners can then be heard screaming and seen ducking under pews or running as papers fly to the floor.

Two people with minor injuries that were sustained while ducking for cover were treated at the scene, MedStar Mobile Healthcare spokeswoman Macara Trusty said.

Governor Greg Abbott asked the state to pray for the victims, their loved ones and the community of White Settlement.

Mr Abbott tweeted: "Places of worship are meant to be sacred, and I am grateful for the church members who acted quickly to take down the shooter and help prevent further loss of life."

Sunday's shooting was the second attack on a religious gathering in the US in less than 24 hours. On Saturday night, a man stabbed five people as they celebrated Hanukkah in an Orthodox Jewish community north of New York City.