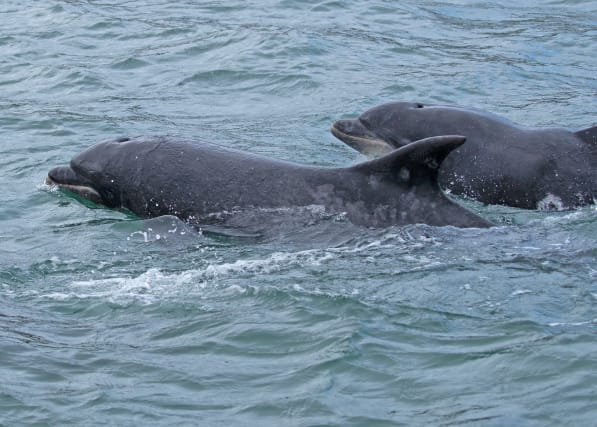 “Thrilling” sightings of bottlenose dolphins and a commuting seal are among the memorable moments at the UK’s coasts this year, the Wildlife Trusts said.

A review of the UK’s marine environment in 2019 reveals thousands of people volunteered to help the seas, amid growing concern over wildlife, climate change and pollution.

The year also saw 41 new marine conservation zones around England announced – but the UK’s waters are still at risk from invasive species and plastic rubbish, the Trusts said.

“The extent of the nature and climate emergency is becoming increasingly clear and more people than ever are volunteering to be citizen scientists and conducting important surveys or taking action to tackle the profound problems of marine litter and plastic pollution.”

One project saw citizen scientists trained to record sightings of whales, dolphins and porpoises off the Yorkshire coast, with 320 individual sightings.

Photographs identified a pod of bottlenose dolphins that had journeyed from Scotland, with the sighting off Flamborough Head the furthest south they had been officially identified.

“Ten years ago, seeing a bottlenose dolphin off the Yorkshire coast would have been rare. We need to collect more data about how and why they are using these waters if we are to better protect them.”

And a seal was discovered commuting between the Isle of Man and Cornwall, revealing for the first time how far seals will travel for food and a place to have pups.

Photographs sent by the Manx Wildlife Trust to the Cornwall Seal Group reveal the seal, nicknamed Tulip Belle, has been a regular visitor to the south west since 2001, returning to Calf of Man to have pups every couple of years.

And Essex Wildlife Trust has seen success with an emerging area of saltmarsh at Fingringhoe Wick following a planned breach in the sea wall five years ago, with fish, waders and other birds making it their home.

Saltmarsh has declined by 85% in the past 100 years, but is an important carbon store, habitat and coastal protection against flooding, the trusts said.

Other good news for wildlife include:

– Cumbria Wildlife Trust reported more grey seals at South Walney nature reserve than ever before – with 483 seals including seven pups, up from 360 the year before.

– More than 1,000 pairs of Sandwich terns bred at North Wales Wildlife Trust’s Cemlyn Bay nature reserve this year, with about 800 chicks fledging, in a large increase on 2018.

– A count by Scottish Wildlife Trust of razorbills that nest on the ledges of sea cliffs on Handa Island revealed 8,207 birds, the highest number since 2006 – though numbers are still dramatically down on 16,000 in the early 2000s.

– Ulster Wildlife reported a great year for the critically endangered common skate, which can live for up to 100 years and grow to three metres long, as they worked with local sea anglers to tag and monitor fish.

But there was also bad news for marine wildlife:

– Around 20 kittiwake nests were recorded on Gugh, Isles of Scilly, and the chicks grew through June – but nests started to fail in July and by the last survey only a single chick remained.

Kittiwakes across Scilly have seen an 87% decline in numbers since surveying started in 2006, and the failure of the Gugh colony is thought to be down to disturbance by people, harsh storms and peregrines frightening off birds.

– Wildlife is increasingly being disturbed by people, according to several wildlife trusts, with jet skis frightening dolphins, kayakers scaring seals, an increasing number of day trips from harbours, and drones are causing problems.

– Non-native Pacific oysters farmed in commercial farms, which were thought not to be able to breed in cold UK waters, are now spreading in the south west as the seas warm due to climate change, with potential negative impacts on wildlife.

– In November hundreds of thousands of nurdles, tiny pieces of industrial plastic, washed up and covered parts of Dorset’s protected Kimmeridge Bay, putting wildlife which mistake them for food at risk.